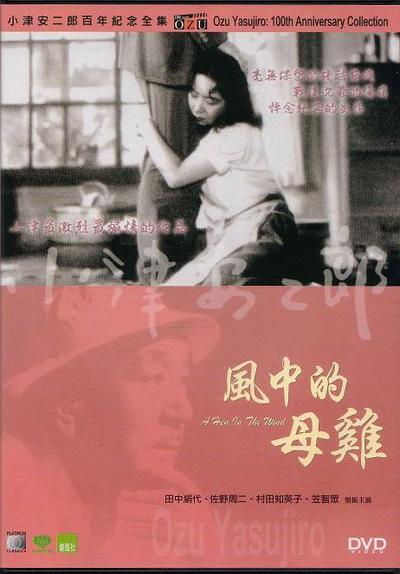 A Hen in the Wind is one of Yasujiro Ozu’s most painful movies. It’s also one of his best.

This Japanese master, a mysterious prince of the art of resignation, has been known in the West for a handful of 1950s movies dealing with the essential themes of time, loss and, specifically, sons and daughters leaving the nest of the family. The New York Film Festival is in the middle of showing every extant Ozu film, and the gaps that are being filled in are quite fascinating.

A Hen in the Wind was made in 1948, just a few years after World War Two. Ozu begins this film with shots of towering industrial buildings and shabby little shacks. Finding beauty amid the aftermath of war, searching out the poetry in ugliness, this is what Ozu is trying to do in this film, and much more.

Kinuyo Tanaka, arguably the greatest actress Japan has produced, plays a young mother waiting for her husband to come back from the war. Times are tough, and her small son takes ill. To pay for his medical care, she is forced to prostitute herself for one night.

Ozu punctuates her dilemma with shots of empty rooms that grow ever more desolate. He seems shy of this material, as if he wants to retreat from Tanaka’s pain into visual abstractions. Perhaps, though, he is trying to support his heroine with these shots, too.

After her ordeal is over, Tanaka has a yearning talk about time passing with an old girlhood friend, and she finds a certain relief in looking up at the sky. Still, she wishes that her son would grow up quickly. This is not a self-aware woman. This is a woman who is not given to independent thought. Yet she feels the injustice of her situation.

Her husband returns. She has always told him everything, and so she blurts out what she has done. After this confession, Ozu uses wild changes of perspective to show the couple in the same hunched over position on opposite sides of the room.

The husband finally shoves her roughly, and their child shoots them a reproachful look. Then, in a masterful series of cinematic ellipses, Ozu gives us the sense that Tanaka’s husband fucks her purely out of spite and wounded vanity. A moth buzzes around a light bulb, and the moth’s shadow is reflected on the husband’s face, a perfect visual symbol of his rage and discontent.

In the film’s most lyrical scene, the husband goes to the whorehouse to see what his wife has been through. He talks to a sweet, hard-up young girl. She shares her lunch with him by a river, and Ozu emphasizes their separateness and their longing to connect to each other (it’s like Antonioni without the rhetoric). When the girl gets defensive and turns her back to the camera, the wind blowing through her thin flowered blouse is enough to break your heart forever. He promises to get her a job, and follows through on this promise. His friend at work tells him, “Use your will instead of your feelings. Control yourself.”

Though he tries to follow his friend’s advice, the husband’s outrage is so severe when he returns home that he knocks Tanaka down the steep stairs of their house. The actress herself looks like she takes quite a tumble, which adds to the shock.

On one hand, this climax is unacceptable to a modern audience, even ludicrous as the husband stands at the top of the stairs and casually asks Tanaka if she is alright — that he doesn’t go down to help her seems absurdly harsh. Lifting her twisted limbs up off the floor, Tanaka’s weak assurances to him that she is fine would be funny if they weren’t so appalling and if we hadn’t invested ourselves emotionally in the film. With Ozu behind the camera and Tanaka in front of it, not involving yourself in this film is not an option.

On the other hand, the image of Tanaka limping up the stairs is a powerful metaphor for the broken spirit of Japan crawling up out of the ashes. When the wounded wife reaches her husband, his talk of forgiveness rings false. He wants to forgive her, but you feel that he’s going to have to bat her around for a while before his pride can be restored, if it ever can be.

Perhaps in that time and in that culture this brutal ending played differently. Today, A Hen in the Wind manages to be the transcendent Ozu’s most disturbing movie. It is the one Ozu film I have seen that leaves a bitter aftertaste. 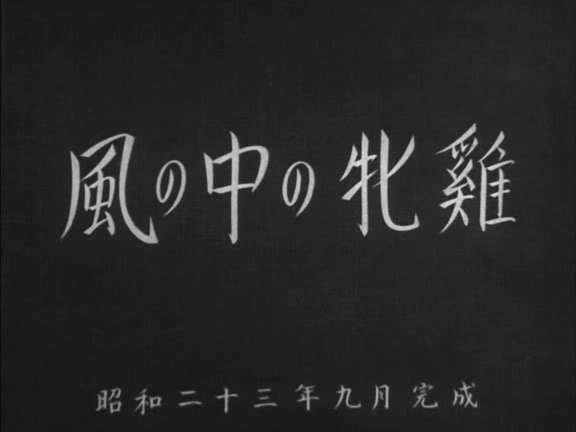 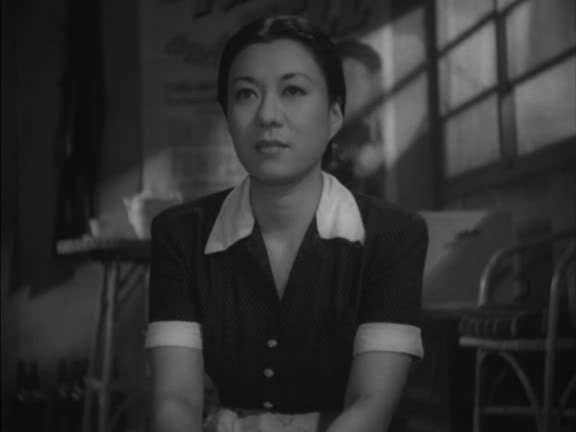 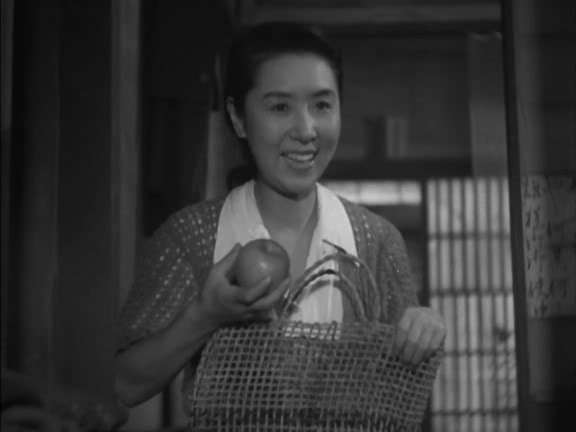 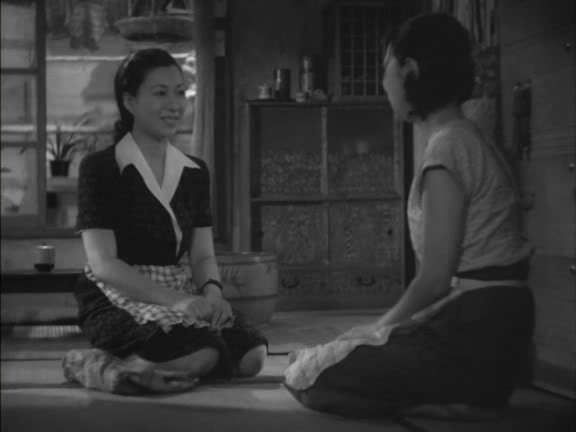