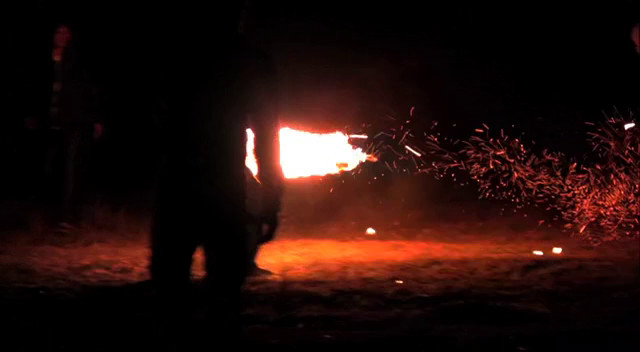 Like A Letter to Uncle Boonmee, Phantoms of Nabua is a portrait of home. The film portrays a communication of lights, the lights that exude, on the one hand, the comfort of home and, on the other, of destruction.

Synopsis :
A fluorescent tube illuminates an empty playground in the evening. Nearby a flash of light is projected on a makeshift screen. This outdoor movie is a portrait of a village repeatedly struck by lightning. As night falls, the silhouette figures of young men emerge, they are playing with a football raging with fire. They take turns kicking the ball which leaves illuminated trails in the grass. The lightning on the screen flickers amid the fire and the smoke rising from the ground. The game intensifies with each kick that sends the fireball soaring into the air. Finally the teens burn the screen and crowd around it to witness the blazing canvas, behind which is revealed the ghostly white beam of a projector.

Phantoms of Nabua is part of the multi-platform Primitive project which focuses on a concept of remembrance and extinction and is set in the northeast of Thailand.

Artist’s statement :
Last year as a tribute to a place I often visit I wrote an article called Wing Rim Beung (Jogging Around the Swamp). It’s an impression of a swamp in my home town in the northeast. In one paragraph there’s a description of a light near the swamp:

‘There is something more beautiful at this swamp however; a wooden pole with a soft white neon lamp attached to it, located at one corner next to a large tree. No matter how many years I pass by, I always have to stop and look whenever I go running. The lamp is always blinking on and off, as if its ballast is in a state of permanent decline. The lamp light is momentarily reflected in the large tree nearby, briefly revealing its green leaves in the darkness. I call it ‘the flash of lightning on the banks of the swamp’.’ (Published in GAGARIN: The Artists in their Own Words, volume 9 #1, March 2008.)

Perhaps for an economic reason, most of the houses in Asia are illuminated by fluorescent lights. Even though these lights make the skin look pale, even dead, for me they relate to home, to being home.

The film’s setting is a rear projection of Nabua (from the Primitive installation) and a recreation of a fluorescent light pole back in my hometown. I used this setting as a playground for the teens who emerged from the dark with a football raging with fire. They took turns kicking the ball that left illuminated trails on the grass. Finally they burned the screen which revealed behind it a ghostly white beam of a projector.

Like A Letter To Uncle Boonmee, Phantoms of Nabua is a portrait of home. The film portrays a communication of lights, the lights that exude, on the one hand, the comfort of home and, on the other, of destruction. 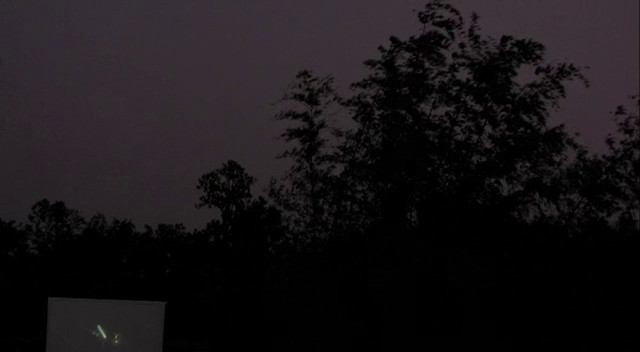 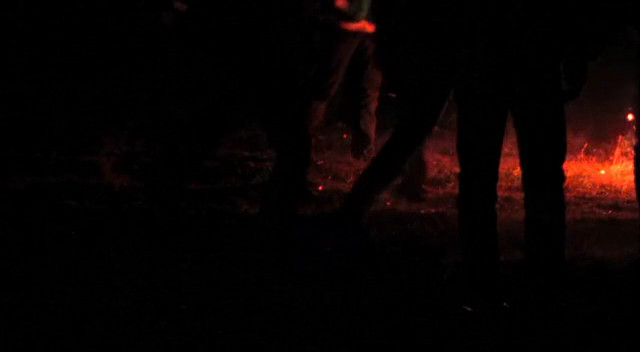