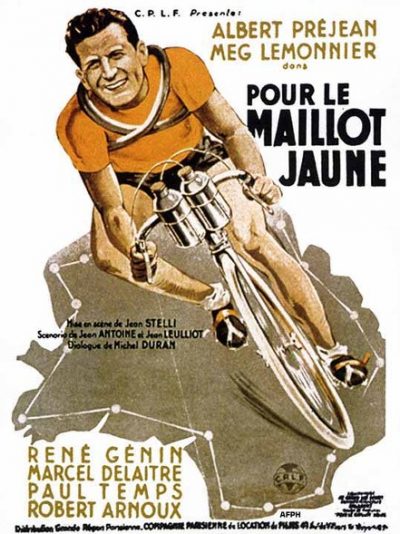 The 1965 Tour de France was won by a young Italian called Felice Gimondi, riding only as a late inclusion. The French had hoped that the winner would be Raymond Poulidor relieved for once of riding against Jacques Anquetil who had always beaten him. By the Chartreuse, however, Gimondi was unbeatable and even attacked Poulidor and left him behind “just to show Raymond that I could go faster and that I was the better man.”

Documentary – described as a cinematic tribute – about the 1965 Tour de France.

Quote:
Pour Un Maillot Jaune (For a yellow jersey) follows the 1965 Tour de France not as a sports documentary but an atmospheric film of the events that surround it. Where riders are shown racing, it is an illustration of the hardship or the danger they face. The main events are the daily routines of the competitors, the bossing about of spectators by officials (which Lalouch emphasises by adding animal noises to the soundtrack), the monotonous days of journalists who follow the race for hours to write only a few hundred words, and the evening entertainment laid on by the Europe-1 radio station.

The film starts with a scene of riders arriving at the start by train and then of race organisers Jacques Goddet and Félix Lévitan and an anonymous man with a cigarette in his mouth supervising the cutting of a blue, white and red ribbon across the road as a band plays the Marseillaise the French national anthem. The film then jumps – as it does throughout its 30 minutes – to an open-air mass for riders wearing their race clothes.

Quote:
There are dramatic shots of riders climbing mountains, often with breathtaking views, a struggle which Lalouch emphasises by slowly fading down the heartbeat-like music to near silence, stressing each rider’s lone and silent battle with himself. In more light-hearted scenes, the team manager Raphael Géminiani is shown angrily realising he has been filmed while he has been asleep, and the soigneur Louis Guerlacher is shown kneading a rider’s muscles as though they were soggy baguettes.

During the 70´s this documentary was used in Argentina as a example of what you can do with good film language. The use of present, past and even future in the story was analized as interesting editing, and the different changes of colour were considered outstanding. The sound also was considered as how to change the sequence by using different sounds, and obviously the absence of any text was considered by students in those days as the utmost in the documentary genre. The camara work was admired especially because in the days when the short was made, no steady-cam existed and everything depended on the capacity of the camareman.

Language(s):French (but without narration, only a few comments from sportscasters)
Subtitles:Not needed