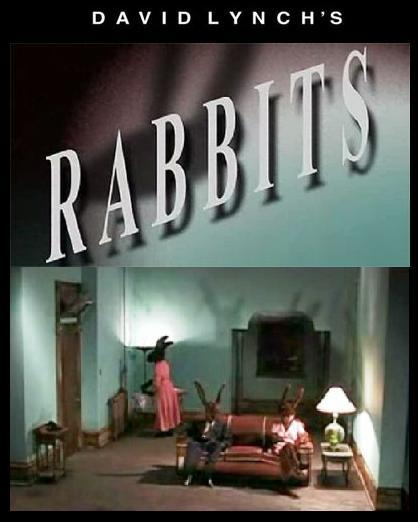 This is a series of shorts that Lynch made after Mulholland Drive, using the actors from that film.

A story of a group of humanoid rabbits and their depressive, daily life. The plot includes Jane ironing, Suzie sitting on a couch, Jack walking in and out of the apartment, and the occasional solo singing number by Suzie or Jane. At one point the rabbits also make contact with their “leader”. A really Lynch-esque series of episodes.

A slow, stylish, eerie and extremely interesting story set “in a city deluged by constant rain where three rabbits live with a constant mystery”. Mr Lynch has a great talent for establishing atmosphere and this series is soaked with his trademark (weird) mood. When I watched the first episode I was not sure whether to laugh or be baffled at what I was seeing. 3 Rabbits talk out of sequence, an unseen audience claps whenever one of them enters the room and laughs (not because something funny is said, but at the misery of the rabbits), a candle burns in the corner, a demon face chants something undecipherable (reminds me of the litanies of Satan, the camera seems to be disturbed in the beginning of the 7 out of 8 episodes by something I can only guess to be a spirit.
We hear footsteps, the door sometimes opens and the phone even rings. All to the frustration of the rabbits. I noticed a lot of people have tried to figure out what Rabbits is about and my take on it is pretty simple. Firstly, this wasn’t the first time I have seen something like this, though this is definitely very well made. I read a book a very long time ago whose title I cannot remember about 2 kids who were put in a scenario similar to this rabbit house and were observed everyday by their captures. The 2 children (I only remember one child called Mavis) were unaware they were being watched and as far as they knew, they had a normal life (went out, watched TV etc) except they didn’t in real life. Everything was in their mind. This seems similar to this story. The rabbits could be ‘prisoners’ who are being observed or kept by someone (the man in the green suit). There is however how they react to the audience (whenever they enter the room and the audience claps, they wait until the applause is finished and continue to sit down) so they are aware they are being watched. According to their dialogue, it seems to me they were once human, “Jane- were you blond?” but it does seem like they remember or who they were. They refer to each other by human names, but they seem confused or disturbed by their situation, “I wish they’d go away”, probably referring to the unseen audience. The last episode offers a good climax but not a conclusion. Or is it? Are the rabbits unable to figure out a way out of their misery…or is this their reality as it always has been? Like the book I read, the children never did escape their house, but they did figure out they were not living a ‘normal’ life. Lynch has never been one to offer a comfortable conclusion to his work- so I would not be surprised if this is the end for his rabbits. 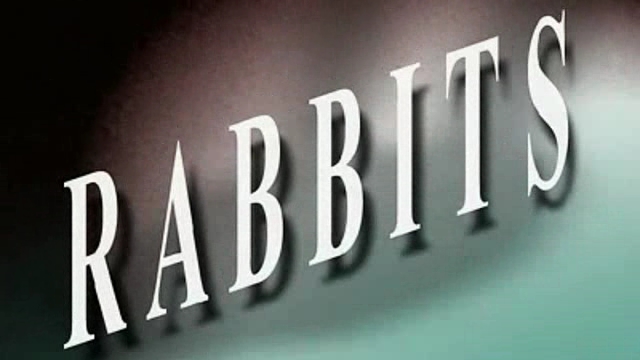 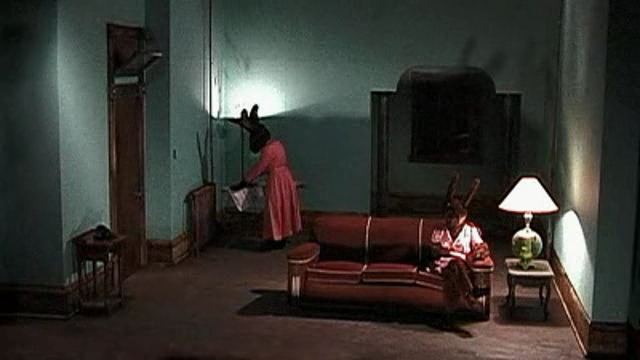 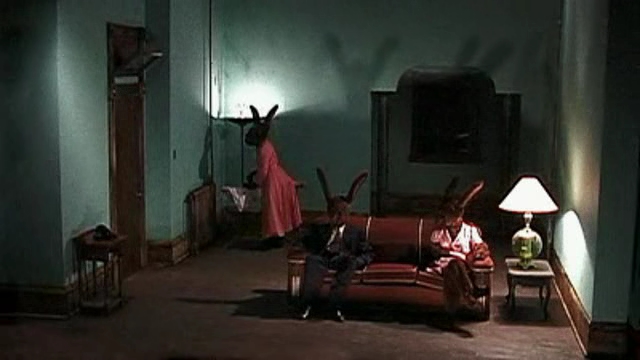