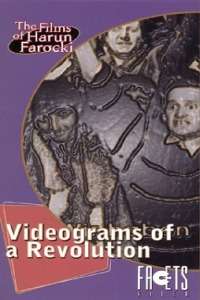 Central Europe Review :
The compilation video Videograms of a Revolution, new on video from Facets multimedia, concerns the Romanian revolution of 1989 – including the fall, attempted flight, and Christmas-day execution of President Nicolae Ceausescu and his wife Elena – and was assembled under the direction of Harun Farocki and Andrei Ujica from independent and state video and film sources. Videograms forms part of the imagistic “closing bracket” of the twentieth century in Eastern Europe. It employs images and techniques used by the early Soviet montagists, especially Sergei Eisenstein’s Oktyabr’ (October, 1927), a depiction of the opening bracket of the pair – the Russian Revolution. Crowds are seen from above scattering under gunfire; revolutionary leaders seize the platform at popular manifestations, and major moments in the story are presented from multiple perspectives.

Moreover, like Oktyabr’, Videograms presents a popular revolution that took place over ten days. While the montagists’ films were often meticulously planned re-enactments, Farocki and Ujica’s work consists of found-footage, assembled and intercut with rather awkward titles to gradually reveal the course of history. The process is foregrounded by the presentational press-conference style of many shots, the constant switching between stock type, the representation of cameras and monitors within the frame and voiceover commentary on the historical import of the images and the relationship of film to history.

Romania became part of the “Iron Curtain” midway through the post-Second World War flurry of the late forties and early fifties when a Stalinist regime took over rule of the country from a monarchy. Yet the country, in some ways, long remained a marginal renegade from the USSR, with significant events including Ceausescu’s statements against the Soviet-led invasions of Czechoslovakia in 1968 and Afghanistan in 1979.

He had emerged as a leader in the mid-60s, and for a time some people considered him to be a leader who might be able to successfully reform the failing Eastern European experiment. This clearly was not the case, though, as he continued to tighten his grip on power over the next twenty years. Ceausescu’s regime collapsed in December 1989. Today the situation does not seem much better, as the conflict between ferocious privatization and a resurgent Communist Party illustrates.

Videograms begins with a weeping and bleeding woman announcing that she had attempted to defend a cooperative in Timisoara against the Securitate, who opened fire on her. She calls for the defence and continuation of the rebellion against the Ceausescus. The camera then shows two buildings in the foreground, while in the grainy background of the image people can be seen marching. In voiceover, the narrator tells us that they are heading toward the Central Committee Headquarters where they will take part in a protest against the Ceausescus. The woman then comments on the most important events which are presented in the background rather than the foreground, a reversal from standard presentational style that mirrors the reversals of power at hand.

At the Central Committee square a few days later, Ceausescu appears with Elena at a popular demonstration before crowds with banners, reasserting his power and authority in a broadcast over Romanian National Television. As he begins his speech, he is distracted as shouting rises and the image shakes and is distorted. The image becomes a field of red.

The narrator tells us that the broadcast was interrupted and replaced on television, but that the cameras continued recording. The red field broadcast on television is set in the corner of the screen, as the recorded image again dominates, revealing the sky towards which many cameraman had tilted their cameras as they had been ordered to do should anything disrupt the demonstration. There are also occasional images of the Ceausescus calling out for calm. Soon the main image corresponds again to the broadcast image, and as the narrator tells us that the sound also corresponds, the box in the corner of the screen vanishes. This sequence thus foregrounds the discrepancy between “official” history, as broadcast on television, and what in fact was happening in the square.

The nature of the disturbance has not yet been revealed. In an attempt to show what in fact has happened the videomakers go back and present the images once again as the narrator analyzes them, performing a sort of archaeology on the official history. They then show newsreel and home videos presenting images of the same moment, gradually revealing small aspects of the beginning rebellion. Nicolae and Elena are glimpsed fleeing to the rooftop and then departing in a helicopter. Protesters are seen enthusiastically throwing books from the balcony where the Ceausescus had appeared.

The story is then taken back to an speech made by Ceausescu at the same location, with the cameras in the same spot. At one point the camera turns away from the official subject matter and pans over the crowd to capture some disquiet. By capturing something of the disturbance, the narrator suggests, it had been the first to go over to the other side, more out of curiosity than resolve. This was a movement away from official history toward documenting the popular events expressed in the movement of the source of the filmic image out onto the streets among the demonstrators.

As the Ceausescus’ fate becomes clear, more and more factions emerge whose relationship to Ceausescu is increasingly unclear. The narrator locates two focal points in these videograms: the square in front of Central Committee Headquarters and the television station. These gradually become forums for representatives of the popular revolution, and events around them are again depicted using multiple perspectives.

This film reaches a climax in a shootout where palace windows are illuminated by gunfire, a sequence that distantly evokes the storming of the palace in Oktyabr’. This image of popular rebellion penetrating the inner circles of power again suggests a curious continuity between the 1917 and 1989 revolutions. This revolution, however, had been necessitated by the abject failure of achieving the utopia prophesied in 1917, as instead there emerged what J. Hoberman has recently called “the Red Atlantis”, a legendary land of milk and honey that never in fact existed. Rather than interweaving government and popular culture into the social fabric in order to promote general welfare, the inheritors of the 1917 revolution fell to technological breakdown, factional non-elected governments, and paranoia, stagnating into tyranny.

Two ambivalent sequences at the end of the video neatly sum up its style and the historical moment that it represents. A news anchor on the renamed Romanian Free Television fulfils his promise and presents images of the Ceausescus’ grotesque corpses. A backward zoom reveals a group of people, many of them recording events with cameras, assembled around the television. Many clap.

After credits documenting who shot the original footage, a man emerges out of the midst of others speaking to a group of cameras. He denounces the lies of the fallen government, for whom he and so many others had sacrificed so much; a government that had divided Romanians from each other and from Hungarians and Germans. It had been far from its proclaimed ideal, only benefiting the Ceausescus and the elite few surrounding them. While speaking about how so many children and family members have suffered and died, he begins to weep, then says, “I wish you a happy Christmas. Long live free Romania.” 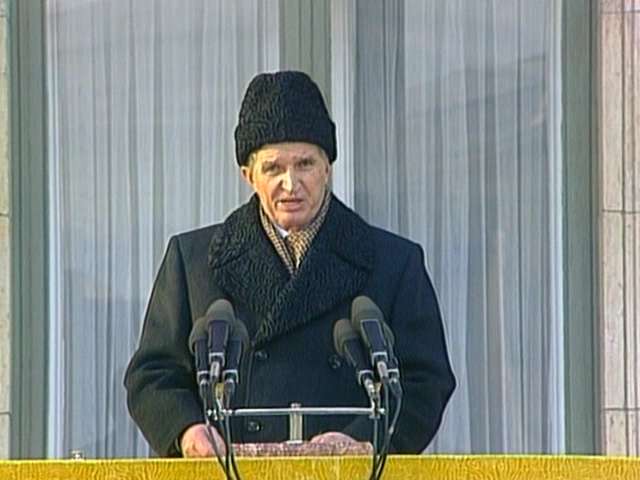 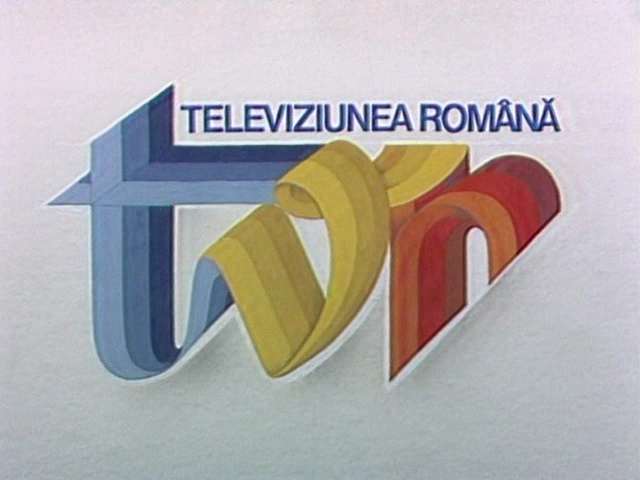 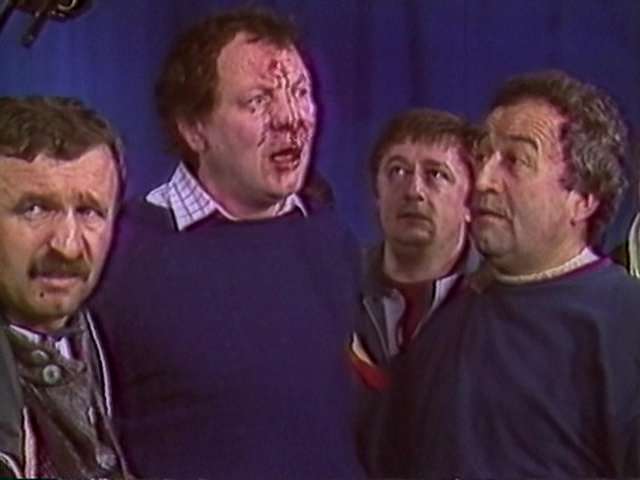 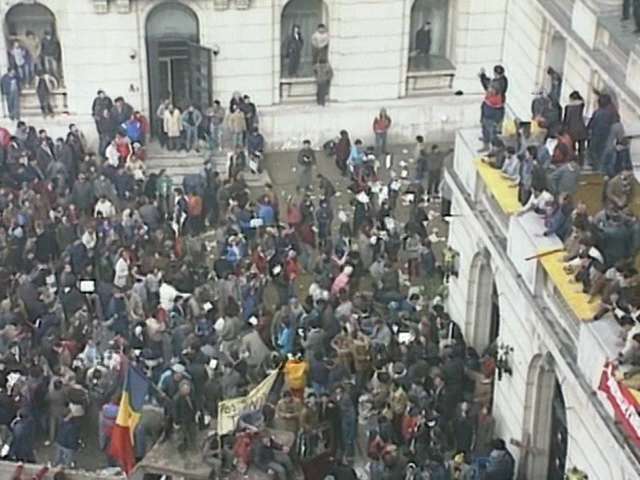 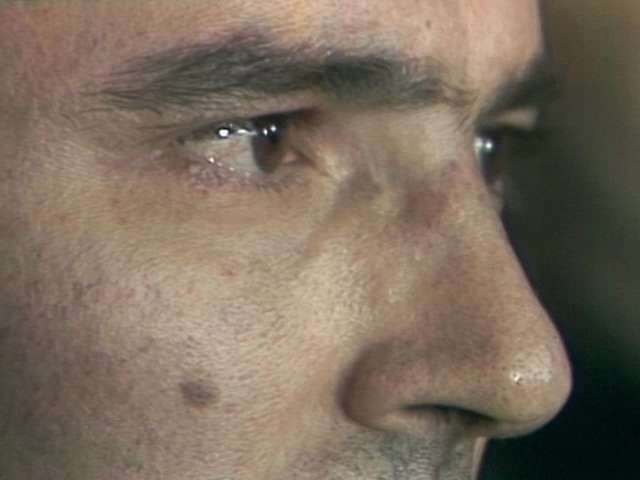 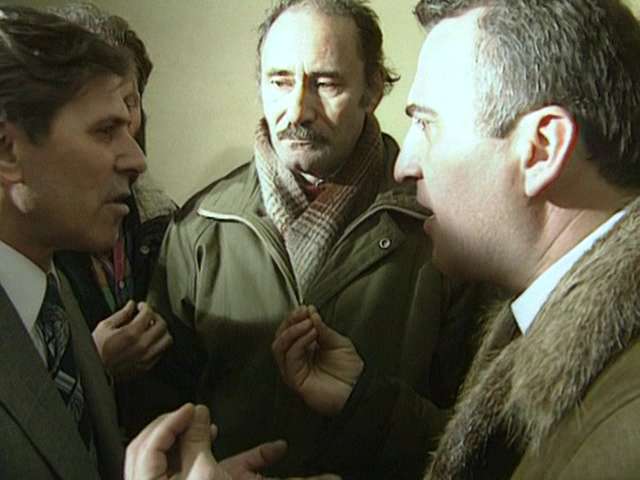 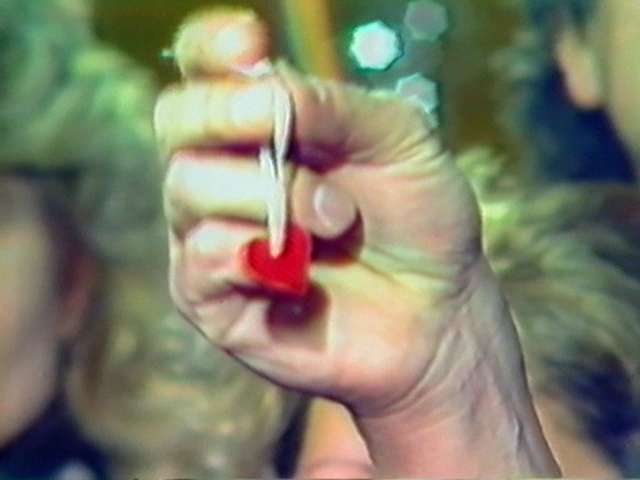 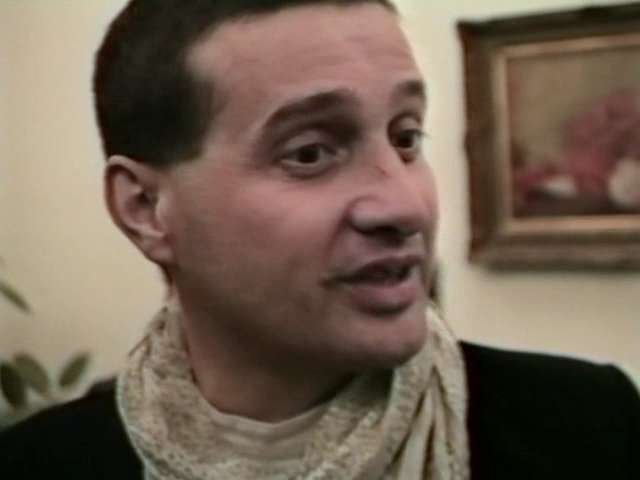 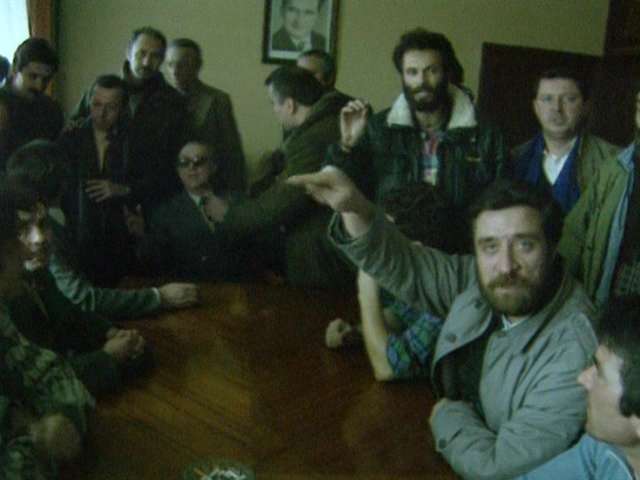 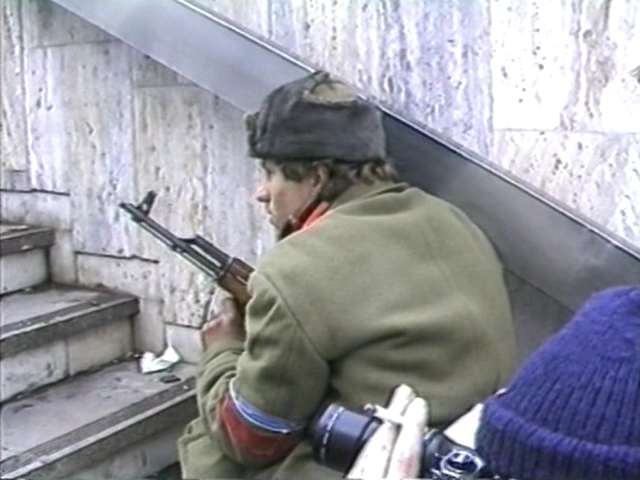