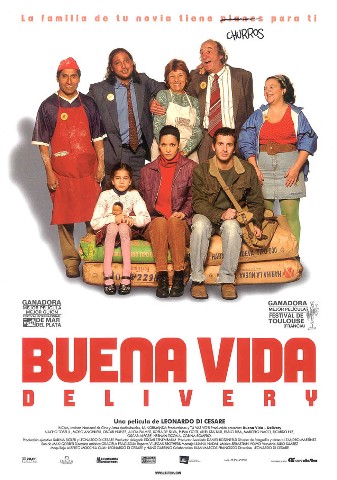 Yet, Hernán is quite surprised when he comes home one night. Pato’s parents and her young daughter have moved in without giving Hernán a warning. The father, Venancio (Oscar Nuñez), a slick character, thanks Hernán, who thinks the move-in is temporary.

However, it seems that Pato’s parents have come to stay. Dispossession laws in Argentina can be quite lengthly and costly. Venancio and his wife turn the kitchen into a small bakery making churros that are sold on the streets. Nothing that Hernán does to get rid of Pato’s family who occupy the house. That is until he takes matters into his own hands and scares Pato’s family.

Pato, who is not able to have a relationship with Hernán, is being pursued by a handsome young man, Jose Luis (Marcelo Nacci), a client at the gas station.

Pato realizes a her chance when she discovers that Jose Luis is much wealthier than Hernán.

In one scene we see Venancio, his wife and the young girl appearing at Jose Luis’ building. In the next scene, Venancio is seated at the dinner table thanking Jose Luis with the same speech he used to thank Hernán.

Critical reception
Deborah Young, film critic for Variety magazine and reporting from the International Film Festival Rotterdam, liked the film and wrote, “Argentina’s economic crisis furnishes fertile background material in Buena Vida (Delivery), a clever social drama spiked with black humor…Well-written and acted, pic vividly conveys the country’s dire straits with clenched-teeth humor and compassion for all. It should benefit from the growing aud for Argentine product…From a low-key naturalistic drama, pic turns into an ironic comedy that catches the viewer up in seemingly unsolvable social and personal problems.”[2] Film critic Ed Gonzalez, who writes for Slant Magazine, liked the film and the way director Leonardo Di Cesare approached the material and wrote, “Nostalgia sweetly and sensitively tinges the sobering film’s emotional politics, as it does in Leonardo Di Cesare’s Buena Vida Delivery, the story of a female gas station employee, Pato (Mariana Anghileri), who moves in with a young man, Hernán (Ignacio Toseli), whose parents leave Argentina in order to escape the ravages of the country’s economic crisis. Infinitely more charming than Daniel Burman’s self-obsessed Lost Embrace, the film is a romantic comedy that accommodates the dejected mood of the country’s people…where Lost Embrace worried only for its main character, Buena Vida frets for an entire nation.”[3] British film critic K.H. Brown liked considered the film deeply ironic and wrote, “Making black comedy out of national economic disaster, the title of this Argentine drama can only be understood as deeply ironic. No one is being delivered a particularly good life. Rather, everyone is struggling to get by, doing what they feel is best for them and theirs…Straightforward, unflashy direction – one suddenly notices the previous absence of music when a few ominous chords signal the beginning of act three, for instance – is counterbalanced by well-observed and nuanced performances and a satisfactorily bittersweet resolution. If Buena Vida Delivery probably won’t put film-maker Leonardo Di Cesare up there with the likes of Walter Salles and Gonzales Innaritu at the forefront of current Latin American cinema, it’s a pleasing enough way to spend 90 minutes.”[4]