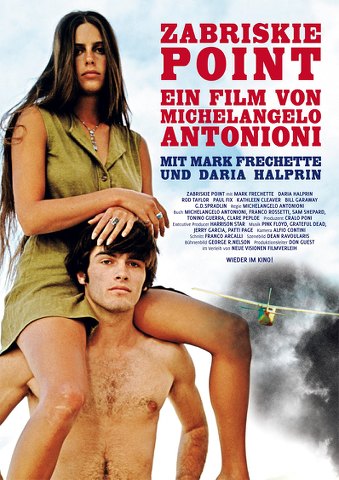 Zabriskie Point, director Michelangelo Antonioni’s only American film, is an unusual, visually stunning examination of youthful rebellion against the Establishment. The film, initially presented in quasi-documentary style, presents a group of college activists discussing key issues of their political agenda. Mark (Mark Frechette) steals an airplane and flies over a desert where he meets Daria (Daria Halprin). She is the pot-smoking secretary to businessman Lee Allen (Rod Taylor), while he is a rebel searching for a worthy cause. In the midst of the arid surroundings, Mark and Daria fall in love. Antonioni’s nonrealistic approach to American counterculture myths, his loose and sluggish narrative, and the dialogue (credited to Fred Gardner, Sam Shepard, Tonino Guerra, Clare Peploe, and Antonioni) caused Zabriskie Point to be poorly received when it was first released. The score features songs from Pink Floyd, The Grateful Dead, Kaleidoscope, The Rolling Stones, John Fahey, The Youngbloods and Patti Page.