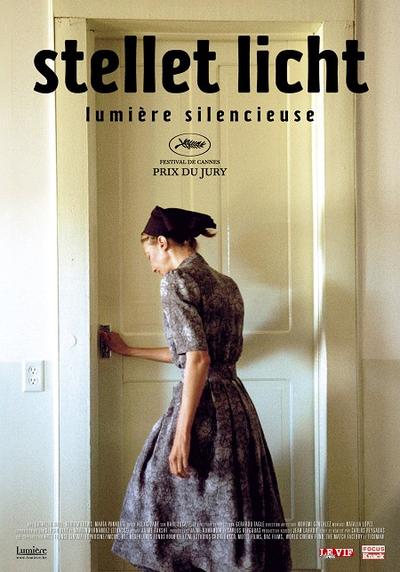 Part of a review from the great Filmbrain blog:

Quote:
As with his other films, Stellet Licht’s tremendous power comes not from its narrative, but from Reygadas’ aesthetics; a masterful, poetic blending of son et image. The film exists at the intersection of John Ford and Terrence Malick, what with its epic landscapes, use of shadow, and depiction of nature and the elements as almost sentient beings. (A minor character wears a highly conspicuous ‘Ford Country’ shirt.) Spiritually there is an obvious nod to Dreyer’s Ordet, though the human drama unfolds in way that is decidedly Bergmanesque. The film opens (appropriately enough) with a breathtaking six-minute shot that is no less a recreation of the opening passages of Genesis, with its separating of light from the darkness. The silence soon gives rise to increasingly louder caterwauls of livestock, and finally we are introduced to Johan and his family, sitting in silent prayer around the breakfast table, the ticking of a clock the only sound we hear. The dawn of man indeed.

The remaining two-plus hours consist of one jaw-dropping sequence after another, yet not once does it venture into style-over-substance territory. There’s a heightened sense of naturalism to it all, particularly in the relationships between the characters themselves, and the physical world in which the film is set. A scene with Johan and his family at a bathing pool is harmonious to the point of feeling more like a bit of cinéma vérité than scripted drama. A close-up extended kiss between Johan and Marianne in a field of flowers (complete with lens flare) feels almost intrusive. Still, Reygadas does add a few playful surprises including an unexpected weather reveal, and an even more unexpected appearance of Jacques Brel.