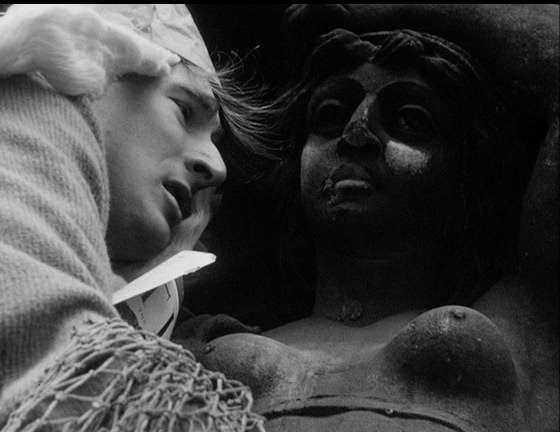 From VILLAGE VOICE:
A shuddering, flickering tribute to two lost compatriots, Ken Jacobs’s Two Wrenching Departures took its original form in 1989 as one of Jacobs’s live “Nervous System” cine-improvisations on dual 16mm projectors. Earlier that year, his former collaborators Bob Fleischner and Jack Smith died within a week of one another—an ironic conjunction, as the pair had been at odds for years, long after Jacobs, Fleischner, and Smith had chaotically joined talents in the late ’50s to create Blonde Cobra, a grimly glamorous rummage through trash-pile transvestism that was one of the most celebrated titles of the pre-Warhol underground scene.

Jacobs himself has gone through multiple phases since the early days with Smith and Fleischner. After shooting beatnik romps featuring the gender-terrorizing Smith’s legendarily haute-daffy he-she shenanigans (critic Parker Tyler quipped that Cobrawas “a Jack Smith film the way one used to say a Bette Davis film or a Mae West film”), Jacobs’s career took a formalist turn, with works like Tom, Tom the Piper’s Son, a rigorous 86-minute analysis of mere seconds from a 1905 Biograph short. More recently, Jacobs has embraced the cheap powers of digital editing, resulting in a new-media synthesis, in both style and content, of his underground and structuralist modes. The best-known product of his 21st-century work is Star Spangled to Death, begun with Smith almost 50 years ago, then finished in 2004 as a six-hour epic chockablock with mordant political observations and footage chunks from the likes of scientific films and Iraq war protests—even the entirety of Nixon’s “Checkers” speech. (Jacobs isn’t the only member of the senior-citizen avant-garde who has lately remixed his own archives: Jonas Mekas is currently exhibiting artfully tweaked home-movie snippets on his website, www.jonasmekas.com.)

Two Wrenching Departures includes Star Spangled footage of Smith cavorting through downtown Manhattan, a shorter stretch of Fleischner from Jacobs’s 1961 short The Whirled, and material nipped from MGM’s 1933 Orientalist romance The Barbarian, starring the ethnicity-shifted Ramon Navarro as an Egyptian prince and Myrna Loy as his pampered English paramour. The latter Hollywood flick, Jacobs explains in opening titles, aired on television the week Fleischner and Smith died, and was “exactly the kind of fantasy that had so enthralled Jack.”

To achieve his antic Nervous System qualities in video, Jacobs recuts a few frames of 16mm at a time—sometimes no more than three—into temporal loop-de-loops and robotic repetitions, inserting intervals of black for epileptic effect, thereby elongating brief moments into otherworldly, slo-mo choreographies. As in Jacobs’s celluloid performances, the flickering motion-studies create the startling illusion of three dimensions when viewed theatrically, and otherwise incidental visual details like architecture and passersby take on a haunting prominence. Smith, dressed in a paper-bag hat, braided shawl, and what looks like a bath mat as war cloak, twists madly past Pall Mall advertisements and Bowery Boy kids, spun into a swirling ghostlike sculpture. When Jacobs adds to this a relentless, booming chorus from Carl Orff’s The Triumph of Aphrodite, the spectral image gains an ecstatic intensity. One wouldn’t expect an hour and a half of this digital manipulation to be so captivating, but Jacobs has perfected his craft over many years, and Two Wrenching Departures projects a long-form symphonic power rarely achieved by today’s video-scratching VJs.