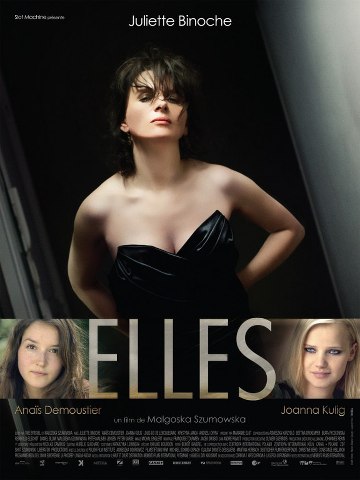 Polish writer-director Małgorzata Szumowska has created an interesting but massively preposterous and supercilious film, saucer-eyed on the subject of bought sex and students taking high-end escort work; it stars Juliette Binoche as Anne, a Paris magazine journalist writing an in-depth piece based on anonymous interviews with two young women, Charlotte (Anaïs Demoustier) and Alicja (Joanna Kulig. As they reveal the non-PC possibility that they are not necessarily demeaned by the work, Anne begins to question her own relationship. Like all movie journalists, her workload is quaintly imagined, and Binoche does some embarrassing “arguing with her editor on the phone” acting. The final dinner-party sequence is toe-curlingly predictable. That said, Elles has some sharp insights into the secrets and lies involved, and the acoustic guitar sing-along between one of the students and a pathetic client is a great scene.
Peter Bradshaw, Guardian

This Paris-set, French-Polish film looks at issues of prostitution and female sexuality from the viewpoint of a metropolitan, middle-class journalist working for French Elle magazine – a viewpoint that writer-director Malgorzata Szumowska must assume makes the film’s issues all the more communicable but causes the film to be too skewed and distant to convince…
The film is too smart to present these girls’ experiences as universally horrific but it tips too far the other way, presenting an impression of empowerment alongside a dissection of brutal (and, for us, voyeuristic) exploitation. The main problem is not the film’s politics, which are open and provocative if a little heavy-handed and obvious, but its perspective. It feels like a portrait of a fleeting bourgeois crisis, something Binoche performs well but which feels skin deep when the film is flirting with more fleshy issues
Dave Calhoun, TimeOut

…Because Anne is played with astonishing sensitivity and commitment by Ms. Binoche, the role is more than a didactic mouthpiece for the screenwriters, Ms. Szumowska and Tine Byrckel. Anne’s slightest mood swing registers as the deeply felt moment-to-moment experience of a woman whose daily life is portrayed as a series of small frustrations and humiliations (underscored by Beethoven’s Seventh Symphony)…
Stephen Holden, NY Times

Set in Paris, telling a story of a journalist profiling two college-age prostitutes, “Elles” stars Juliette Binoche and comes from Polish director Malgoska Szumowska, who also co-wrote the script. The sex in the picture is explicit enough to earn an NC-17 in this country. At the risk of a gender-related generalization, though, anybody watching it can tell moment to moment, scene to scene, that the usual male-centric and voyeuristic objectifications and shooting strategies do not apply…
One of the strengths of “Elles” is its authentic desire to deal with Anne’s comfortable but diminished life. Are we all prostitutes to some degree? It’s a facile question, but Szumowska’s film allows Binoche to dominate without false glamour and without reducing Anne’s circumstances to a cliche. Also the film has the courage of its convictions to lead the audience to a truthfully open-ended conclusion, allowing us to draw a conclusion or two of our own.
Michael Phillips, Chicago Tribune