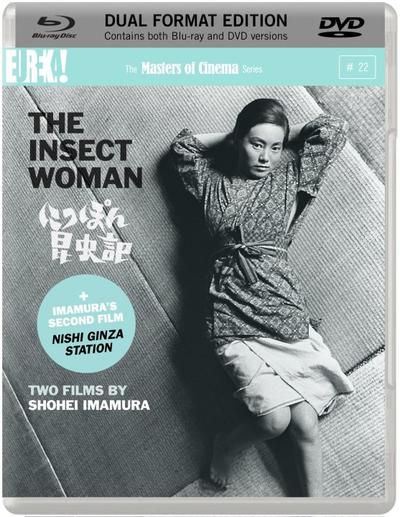 …Shohei Imamura presents an unsentimental, provocative, and compassionate examination of resilience, pragmatism, and the essence of human behavior in The Insect Woman. Using informal, cinéma vérité-styled camerawork, freeze-framed scene changes (accompanied by melancholic folksong verses), and historical context (Japanese isolationism, World War II, postwar occupation, Korean War) Imamura achieves a clinically objective, yet sympathetic portrait of his archetypally sensual, primal, and strong-willed heroine as she perseveres through the turbulence and uncertainty of her economic and societal confines: Tomé’s job at the mill during wartime Japan, her attempts at an honest living by working as a cleaning woman during postwar occupation, her resort to prostitution during the economic depression, her rise to the role of madame during the 1950s social reforms (similarly explored in Kenji Mizoguchi’s Street of Shame). By correlating episodic fragments of Tomé’s life with the dynamic events and profound changes of everyday existence in early twentieth century Japan (and Asia in general), Imamura illustrates the instinctuality, mysticism, and idiosyncrasies embedded in the native culture that is often suppressed and aestheticized (especially evident in the films of Yasujiro Ozu) in the country’s postwar, westernized, “official view” of Japan, and in the process, celebrates the resilient soul of a marginalized national identity.
Acquarello, Strictly Film School

The Insect Woman also signals a break from the classical traditions of Japanese cinema, and especially those of Yasujirô Ozu, whom Imamura trained under on Tokyo Story (1953). Working-class females were commonly depicted by Ozu – and, indeed, his contemporaries Naruse and Mizoguchi – but their technical and emotional exactitude stifled the young Imamura, who thought that film should be purely expressive; each frame must be bursting with the feeling of its characters. He achieved this notion with 1961’s Pigs & Battleships, but not until this following picture would he discover the thematic and visual identity that would run all the way up to Warm Water Under A Red Bridge (2001). If The Insect Woman isn’t Imamura’s best film then it’s certainly his most significant, and a work of unparalleled ambition for its time. For that reason alone, it demands to be seen.
Michael Ewins, E-Film Blog, February 22, 2012

The film’s original Japanese title, which translates as Entomological Chronicle of Japan, signals Imamura’s detachment from his subject. (He also appended the clinical subtitle Introduction to Anthropology to another of his great sixties films, The Pornographers [1966].) With The Insect Woman, he wanted to avoid the traps of the tragic woman’s film, and in place of what he called “the pattern of suffering and pathos,” there is black humor and something of a nature documentary quality; the periodic use of freeze-frames conveys the sense of Tomé as a specimen under glass. The film is neither critique nor celebration, and Imamura’s stance, while far from warm, is wholly nonjudgmental—more than anything else, he regards Tomé with an awed fascination.
The point of this rapt scrutiny, as in almost all of Imamura’s films, is to see through to a repressed or unacknowledged essence of Japanese society, to assert that the distance between feudal and modern Japan is shorter than anyone, least of all the modern Japanese, would like to admit. As he told Bock, “The Japanese haven’t changed in thousands of years.” That this essence is akin to a vulgar life force—a font of wayward desires and ingrained superstitions—explains why his movies thrum with an ecstatic energy, not least when they are at their most perverse and irrational.
Dennis Lim, Criterion.com, May 20, 2009

…The film has an exultant quality, illustrating Imamura’s love of the medium and command of his materials – reflected in the vigorous camera movements and editing, the harsh black-and-white photography, the absence of mawkishness, the enormous compassion and respect for all the characters, even the villains, and the incisive performances. Sachiko Hidari’s Tome is the film’s soul; as she gradually loses her illusions and youth, her eyes deaden and her once seductive mouth thins – in two hours, she lets us see what it means to be 24 and 31 and 45. Also outstanding are Kazuo Kitamura as her unswerving stepfather; Seizaburo Kawazu as her malevolent patron, Karasawa; Jitsuko Yoshimura as her disarmingly perky daughter; Tanie Kitabayashi as Madame; and Masumi Harukawa as Midori, a woman who hires Tome as her maid and eventually becomes one of her whores. As a maid, Tome stands in the kitchen, quietly weeping, listening to Midori make love to an American serviceman; as a Madame, Tome cheats Midori and scalds the hand of her own maid in a rage of frustration. The miracle of The Insect Woman is that you follow Tome from one plane to the next and, despite the distancing intrinsic to Imamura’s expeditious narrative, you bleed for her at every sterp.
Gary Giddins, Village Voice, April 3, 1990