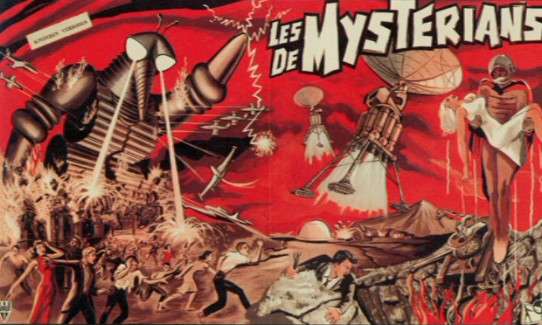 Aliens arrive on Earth and ask permission to be given a certain tract of land for their people to live on. But when they are discovered to be invaders, responsible for the giant robot that is destroying cities, the armed forces attempt to stop them with every weapon available. -imdb

Review:
We have always enjoyed the early Japanese Fantasy Films circa 1954-1963. During this time they took themselves and there subjects seriously. What ever their technical short comings were you could see they were in earnest. Basically after this period starting with KING KONG -vs- GODZILLA the slide down to kiddy fare began just a step above STARMAN.

Though we consider the original GORJIRA/Godzilla as the first and the best THE MYSTERIANS is the one (1) we enjoyed most. This is a SPACE OPERA on a grand scale. Watching it is like seeing the old pulp Science-Fiction magazine covers of the 1930’s being brought to life. Basically the team that acted and made the original Godzilla are back plus the addition of Technicolor and WideScreen. They needed a big and splashy story and THEM -vs- US for the world was the canvas that well suited this first effort.

We first saw it on T.V. in the mid 1960s and were enthralled like any early teenagers by these scenes of action and massed destruction. But even then we (my brother and I) felt something was missing. It was not until the early 1990s that we saw a restored Japanese print in it’s original format (WS) and subtitled in English so what was happening on screen now made more sense. Best of all there were more scenes of destruction.

It is a pity that TOHO did not make a direct sequel and made BATTLE IN OUTER SPACE instead (still a fun film). Now that they are more technically adapt it would be nice to see this film remade. The one (1) thing I would keep though (other then the basic plot line) is the exceptional musical score. -imdb