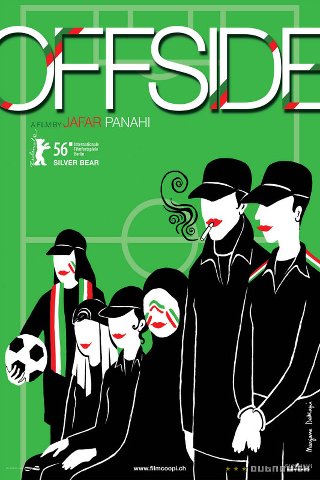 Football – or soccer – has been on everyone’s mind this summer because of the spectacular tournament of tournaments, the World Cup. For some, this global extravaganza of athleticism is more than a sporting event; it is a cultural phenomenon. Questions of politics and nationalities are ever-present. Iranian director Jafar Panahi, never afraid to poke into difficult subject matter, has centred his engaging new film around an explosive contemporary issue: in his country, it is illegal for women to attend soccer games at the stadiums. Offside is not just about women being banned from matches, it is about their rights in a Muslim society.

Set against the backdrop of an actual match Iran played to qualify for the Cup, Offside focuses on a group of soccer-crazy young women. Like their male counterparts, they just want to indulge in the frenzied communal moment of supporting their country and celebrating the skills on display. To fulfill their desires, they must pass themselves off as young men, hoping that disguises will get them past the guards who ring the stadiums.

Panahi milks this wonderful concept to the fullest. Boarding buses full of raucous male fans, the women try to disappear into the crowd – not an easy thing to do. The actors and director do a fine job communicating the unease on their faces and in their body language. When they approach the turnstiles and security guards, they must wait to see whether their ploy has succeeded, all the while caught up in the sheer energy as the crowd cheers for the imminent start of the game. What transpires is filled with emotion, from the crowd’s frenzy to each woman’s quiet worries.

Panahi entirely avoids lapsing into a black-and-white portrayal of his subject. While all our sympathies lie with the young women, Panahi ensures that we remain sensitive to those on the other side of the issue: working-class soldiers and guards who must enforce policies regardless of their personal feelings. As the women inch closer to the stadium – and a glimpse of the magic grass carpet of the playing field – Iranian society and its contradictions are laid bare. — © Toronto Film Festival 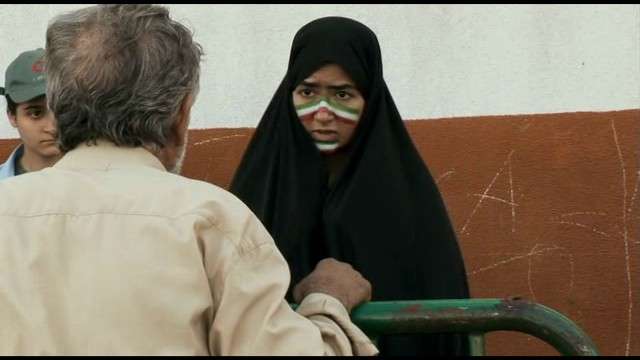