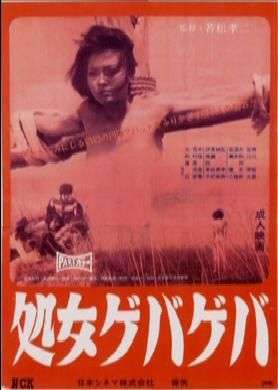 Synopsis:
A gang of men and women bring a virginal couple into a barren landscape. The couple is tied, teased, poked, and undressed, provoked to sex. The man thinks he has a tail which comes and goes and has strange dreams. The woman is crucified while the man is given the corrupting and alluring status of boss while they play sexual games with him and the Yakuza boss watches from afar with a long-range rifle. Violence and madness erupt, mixed with Christian symbolism as they kill and rape each other. A messy study on the innocent vs. bestial in man.

Review:
Violent Virgin (1969) is one of Kôji Wakamatsu’s early films. Although it is certainly part of his pink film oeuvre the film maps out many of the director’s later concerns. Like other filmmakers working in the late 60s and 70s, such as Melvin Van Peebles and Ruggero Deodato, Wakamatsu used the format of sexploitation as a way into an exploration of other transgressive acts such as extreme violence, amorality and oppression. The film does have a story: a man and a woman are held in captivity by a group of yakuza thugs and the film explores various shifts in power dynamics between the pair and this group and another group of well-dressed yakuza bosses. Yet, as the film progresses the characters appear to be more like symbols acting out relationships in an allegory rather than part of a narrative. Wakamatsu sets these tableaux entirely outdoors in the wilderness. There is no sense of a horizon and, as such, no suggestion of a place beyond this world. From here, it is easy to speculate that Wakamatsu used this form to comment on broader real-life socio-political dynamics. This comment, though, is fragmented and hinted at, and, arguably, purposefully eclipsed by erotic sensation, although it alludes to dysfunction, tyranny and ultimately meaningless struggles for leadership.

What is so refined about the film is that its exploration of domination is slippery and nonsensical. The microcosm portrayed in this dune-scape is constantly in flux. The central male character, played by Atushi Yamatoya, goes from kidnapped victim, to escapee, to killer, to demon and then to oppressor himself. So to with the portrayals of sex. Here both male and female characters go through a range of experiences of erotic pleasure, physical restraint and humiliation. Remarkably for the time and even notable now, there is a depiction of mutual pleasure in the male/female sex scenes that seems to transcend the male perspective. The women characters are seen to be as sexually and violently charged as their male counterparts. However, Wakamatsu stops short of evening the scores fully by only showing the female characters being subjected to rape.

For a film constantly switching between numerous complex sexual and socio-political positions it remains elegantly simple in its poetic rendering. Wakamatsu favours an uncluttered mise en scène. Yamatoya is nude for much of the film or wearing a woman’s slip, and his lover Hanako, played by Eri Ashikawa, is topless and wearing only her underwear. So many shots depict nude flesh against the grassy wilds or bare earth. There is something levelling about this that creates a sense of equivalence between the characters, a grounding that is present at the same time as a sense of fluctuating structures. This suggests that Wakamatsu wanted to show the characters as base essence as if he was somehow trying to get close to the root of the motivations that prompt the members of the group to behave in the way they do. He, like us, is left with a sense of enigma but also the suggestion of myriad social configurations.