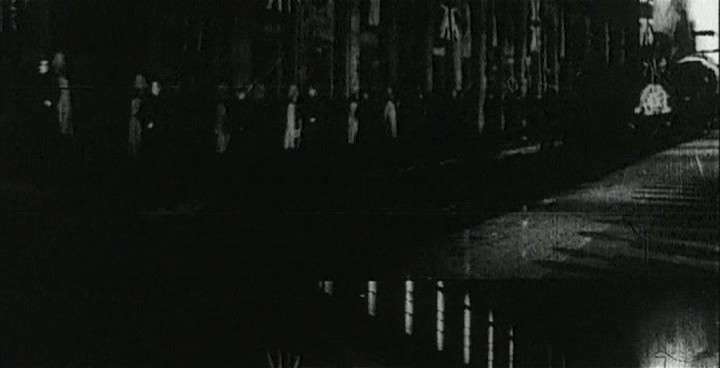 A young woman, night, an American feature film. She enters a house, a dark corridor, a thriller. While she forces her way into an unknown space together with the viewer, the cinematographic image-producing processes go off the rails all around her. The rooms through which she goes telescope into each other, become blurred, while at the same time the crackling of the cuts and the background noise of the sound track – the sound of the film material itself – becomes louder and more penetrating.
The pace becomes frenetic, the woman is being pursued by invisible opponents, she is pushed against a mirror, walls of glass burst, furniture tilts and the cinematographic apparatus which the heroine begins to attack in blind fury also suffers. The images jump and stutter, the perforation holes tilt into the picture, the sound track collapse inwards in a will o’ the wisp destruction scenario – something which only film can do so beautifully. In ten minutes ‘’Outer Space’’ races through the unsuspected possibilities of cinematographic errors – a masterpiece.

A woman goes to bed, falls asleep, and begins to dream. This dream takes her to a landscape of light and shadow, evoked in a form only possible through classic cinematography.

“Dream Work” is – after “L’Arrivée” und “Outer Space” – the third section of my CinemaScope Trilogy. The formal element binding the trilogy is the specific technique of contact printing, by which found film footage is copied by hand and frame by frame onto unexposed film stock. Through this, I am able, in a literal sense, to realize the central mechanism by which dreams produce meaning, the “dream work,” as Sigmund Freud described it: displacement [Verschiebung] and condensation [Verdichtung]. The new interpertation of the text of the original source material takes place through its “displacement” from its original context and its concurrent “condensation” by means of multiple exposure.

Moreover “Dream Work” positions itself as an hommage to Man Ray, who, in 1923 with his famous rayographs in “La retour á la raison” was the first artist to use this technique for filmmaking, exposing the image by shining light through physical objects onto the film stock.