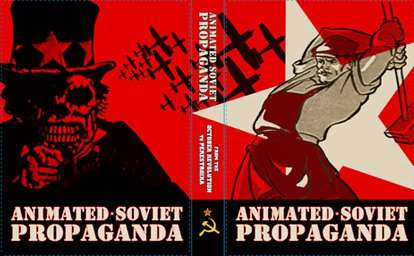 BLACK AND WHITE (1933) Whenever the collection criticizes American racism, its credibility goes way up. We start with this shocking, graphic exaggeration (?) of America as a land where slavery still rules.

MISTER TWISTER (1963) This poem-based tale uses cute animation to tell the story of a racist American who rejects a St. Petersburg hotel room because a black man is in the next room. This is a fine film, except for the fact that racism can be found in any country. I don’t see why Russia should call herself an exception.

SOMEONE ELSE’S VOICE (1949) Loving, Bambi-like animation becomes a hideous endorsement of intolerance and conformism. A bird ‘back from abroad’ is publicly thrashed by an angry mob for singing decadent jazz instead of traditional songs. Just the sort of oppressive horror we expect from the late Stalinist period.

MR. WOLF (1949) An odd, not entirely mean-spirited story animated in a style reminiscent of a Fleischer Superman cartoon. A frightened millionaire and his family escape to an “Island of Peace.” But the American forgets his commitment to pacifism as soon as his fortune is threatened.

THE MILLIONAIRE (1963) This nasty satire has a bulldog inherit his master’s fortune. He soon behaves like the rest of the Capitalist creeps, barking at peaceniks with the rest of his Wall Street cronies, etc. Because he’s rich, the dog can urinate on a cop and receive a smile in return. He ultimately finds the perfect location to practice his corruption, the U.S. Congress.

SHOOTING RANGE (1979) This truly hateful show uses Zap Comics- style imagery to present a fable of an unemployed young American (with an English sports car!) who finds a job in a Times Square shooting gallery — as a target. The evil Capitalist eventually gets the idea of letting the boy build a family, and employing them all as targets to be shot at.

KINO-CIRCUS (1942) Hitler is caricatured and lampooned in three blackout skits. The Russian stage emcee looks like Charlie Chaplin, but we’re told he’s a caricature of the famous Russian clown Karandash.

FASCIST BOOTS ON OUR HOMELAND (1941) Horrible, inhuman Nazi invaders are eventually repelled by noble Soviet planes. Standard stuff not that much different than our own wartime cartoons; all that’s lacking is a sense of humor.

THE VULTURES (1941) More of the same. Nazis are pigs and carrion birds.

FOUR ANTI-HITLER NEWSREELS (POLITICAL SATIRE) (1941) Quick animated lessons, showing the need to crush the Germans and defeat their treacherous spies. A positive episode lauds cooperation with the English “Tommy” ally. It’s the only time in any of the shows that a country other than the USSR is praised.

TO YOU, MOSCOW (1947) A color ode to the 800th anniversary of the founding of Moscow, celebrating its defeat of invaders through history and the miracle that it still stands.

THE ADVENTURES OF THE YOUNG PIONEERS (1971) Young Pioneers are essentially Red Boy Scouts. Three enterprising Russian kids (one is a girl) withstand the Nazi invaders, hoisting a Red Flag over the German headquarters. They’re saved from a firing squad by a noble Soviet tank commander. Character-building “fun” for small kids.

THE PIONEER’S VIOLIN (1971) Small kids also need a good dose of bittersweet Russian misery, it seems. Beautiful, frightening animation shows the only survivor of a Nazi attack to be a child. Ordered to play his violin, the Young Pioneer refuses, and then decides to play a rebellious tune that infuriates his captors. Strong enough to mark a sensitive child for life.

VASILYOK (1973) More interesting animation highlights this odd tale of a boy searching for his grandfather, lost in the war. The old man returns, in spirit, in the form of a warship bearing his name. What ordinary grand-dad can compete?

A LESSON NOT LEARNED (1971) Creative techniques elevate this story of a Nazi war criminal protected by the Allies and encouraged to run for public office in West Germany. The ‘angel’ of Hitler follows him everywhere. Since history bears out parts of this show, it’s more effective than many of the others.

ATTENTION! WOLVES! (1970) A scary, semi-abstract story of the West encouraging the raising of ‘Wolves’ — feral children representing the threat of Neo-Nazism, come back as strong as ever. Ends with a genuinely frightening montage of war atrocities.

TALE OF A TOY (1984) An artsy, difficult-to-follow and disturbing blend of animation, newsreel and stop-motion collage work. Images of Spanish and German Fascism destroy the notion of Don Quixote, just for starters.

WE CAN DO IT (1970) American Generals and Capitalists hatch an evil black bird from a Nazi egg, threatening lovers and children the world over with nuclear doom. But the peace-loving pacifists of the world unite to defeat the monster. Even in “pacifist” propaganda, it’s apparently important to demonize the USA. Oddly, the giant black bird bears some similarities to our old Sci Fi film The Giant Claw. 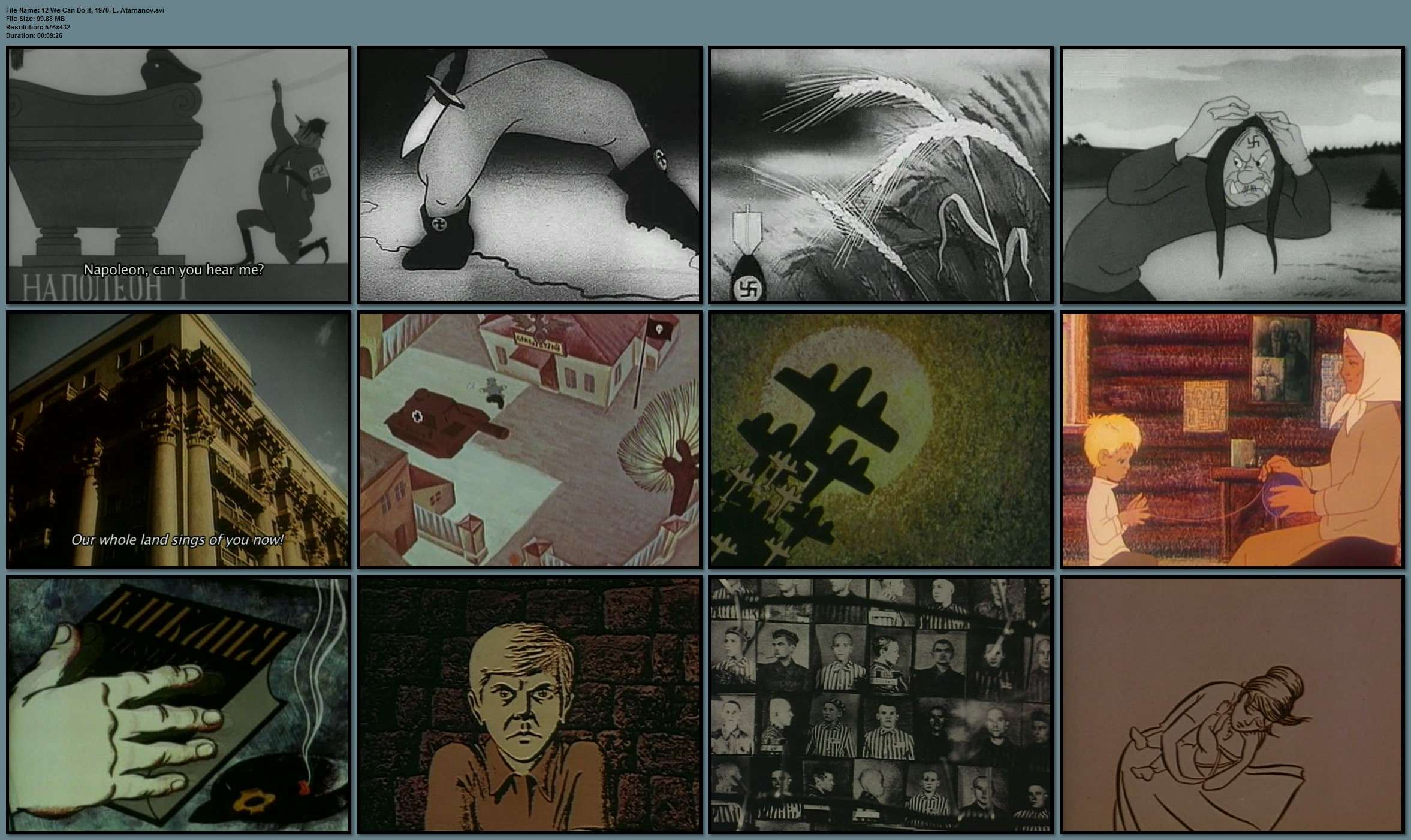 WE’LL KEEP OUR EYES PEELED (1927) A Government bond drive is promoted with the claim that a foreign trade embargo is responsible for Soviet economic problems.

THE SHAREHOLDER (1963) One of the better-animated films, this one has real style even though its warped view of America is definitely filtered through alien eyes. A worker loses his job but still has one share of company stock, which becomes the center of an ironic joke.

PROPHETS AND LESSONS (1967) A pack of White-Russian vermin expelled to the West, goes to a Capitalist prophet (?) who inspires them to assault the Soviet Union. But their every attempt is turned back by the mighty hammer of the Red Worker. The West predicts economic doom but the unstoppable Red industrial machine prevails.

CHINA IN FLAMES (1925) An early and rather lengthy example of direct political propaganda, the film shows China divided up by evil colonial powers. Communist hope Sun Yat Sen finally appears, but the film seems incomplete — there’s no last chapter with a prediction for a Communist future in China.

FORWARD MARCH, TIME! (1977) This one is elaborate but very confusing … and uses rock music as well. It is “based on ideological poems written by Vladimir Mayakovsky in the 20s, as well as advertisements Mayakovsky created during the New Economic Policy with avant-garde artist Alexander Rodchenko.” I couldn’t follow it.

SOVIET TOYS (1924) An early attempt to sway public opinion on a specific issue, in this case against party bosses allowed to function as old-style entrepreneurs to help the economy shift into a socialized pattern. The same old images dominate — a fat, spoiled Capitalist eats everything he sees. The Red Army eventually forms a Christmas tree. Stubborn types (Churchmen, fat cats, bourgeois women) are executed and hang from its branches, while the workers place a Red Star on top. Ho Ho Ho.

SAMOYED BOY (1928) An early, weird animation that shows an Inuit Eskimo rescued from the ice and brought to study in Moscow.

THE MUSIC BOX (1933) Another weird early animation poking fun at pre-revolution Russia. A town needs a new mayor, so the royal authority sends a moron with a clockwork brain to run things.

LENIN’S KINO PRAVDA (TRUTH IN CINEMA) (1924) Supposedly directed by the famous Dziga Vertov, this is a baffling parade of odd images and Communist claims. Difficult to understand.

WAR CHRONICLES (1939) Foreign powers dream about dividing up the new Soviet Union for their own profit, but all attempts are turned back! This one even depicts Japanese hostilities in the East. Once again, smoky factories and bold worker-soliders lead the way.

A HOT STONE (1965) Excellent animation can’t quite make the moral lesson of this one stick. A boy finds a magic stone that will allow people to live their lives over again. His bearded, noble Grandfather prefers his life of hardship, revolution and Communist victory to remain just as it is.

SONGS OF THE YEARS OF FIRE (1971) A nostalgic, expensive-looking ode to the Red Army using bold revolutionary designs to illustrate four or five songs of the civil war years. Beautifully orchestrated music; all so we can sing along to a peppy tune about “My happy machine-gun cart.”

PLUS ELECTRIFICATION (1972) This looks like it was originally in 70mm and widescreen; the picture is slightly letterboxed and cropped. Lenin’s idea that electricity and the new government would unite is given a Utopian workout, depicting the whole country (and the European Eastern Bloc) united by electric light. It’s no more convincing than our own Disney-fied Carousel of Progress propaganda. 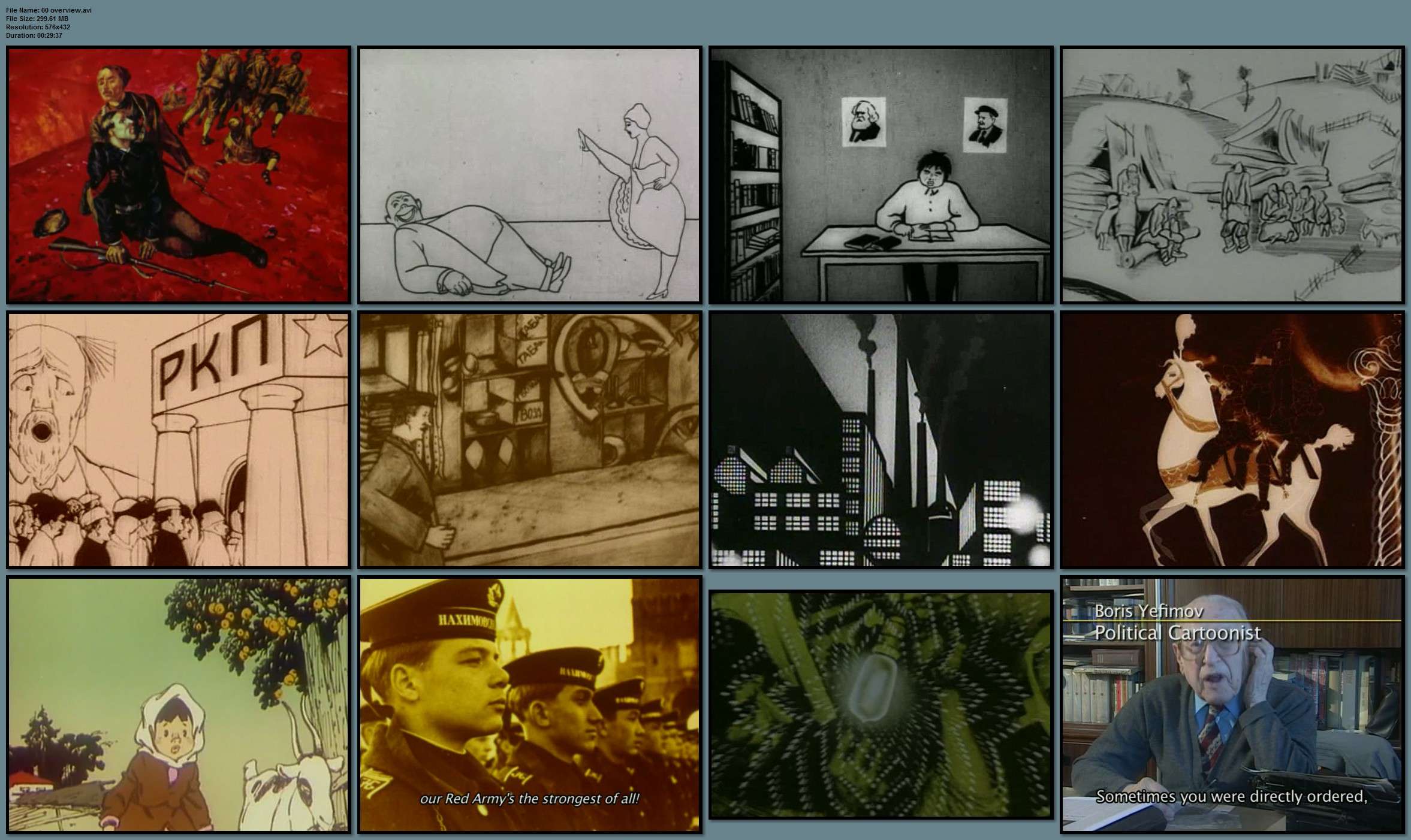