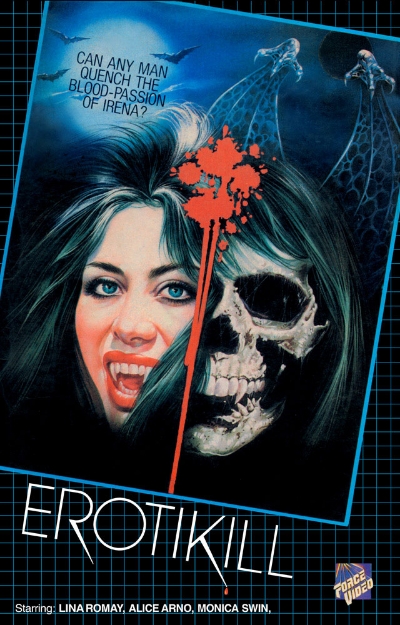 This 1973 Jesus Franco entry is of great significance in the director’s 150+ film output for being the film that gave Lina Romay, soon to becomes his long-term partner, collaborator and muse, her first starring role.

And what an introduction: The film opens with Romay wandering out of the early morning mist, clad only in a belt, knee-high boots and cape, Franco’s camera lovingly moving over every inch of her body as Daniel White’s seductive theme (reused in other Eurocine entries like Zombie Lake) plays on the soundtrack.

True, it’s slow moving, accomplishes little in terms of narrative and couldn’t be more sleazy and cheesy if it tried, but it’s 100% Franco, a perfect distillation of his idiosyncratic, highly personal, approach to cinema.

The question is knowing what to make of it all. Franco’s oft-criticised use of the zoom lens and out of focus shots indicate, at one level a cheap, careless, throwaway approach to film-making. But, if one assumes that Franco knows what he is doing, then these stylistic choices assume a deeper significance, challenging dominant film making practices and reminding the viewer of the constructed nature of all that he or she is seeing. (And, given the director’s profound knowledge of the cinema and awareness of Godardian techniques, one sees no reason to assume he doesn’t.)

A similar point might be made regarding the film-maker’s decision to make the Female Vampire a mute. Obviously it made shooting easier and meant that Romay’s limitations as an actress (as distinct from performer) could be more easily concealed. But we might also speculate that her silence indicates a refusal to enter into the male dominated symbolic order of language — or however it is that the Lacanian double-domes would gloss it.

The way Franco handles erotic/pornographic material here (this cut of the film being the medium strength one, more sexually explicit than the horror-slanted likes of Bare Breasted Countess but containing none of the hardcore material found in, say, Insatiable Lust) is similarly problematic. Franco clearly takes a voyeuristic delight in Romay’s body and activities, and invites the (male) spectator to share his obsession, yet the film’s sexual dynamics are more In the Realm of the Senses than Deep Throat, blurring and intermingling sex and death in ways that would, one images, confuse and confound the raincoater audience.

What can one say, then? Whether by accident or design, films like Female Vampire ask interesting questions and are of value for so doing.
K H Brown, Kinocite.