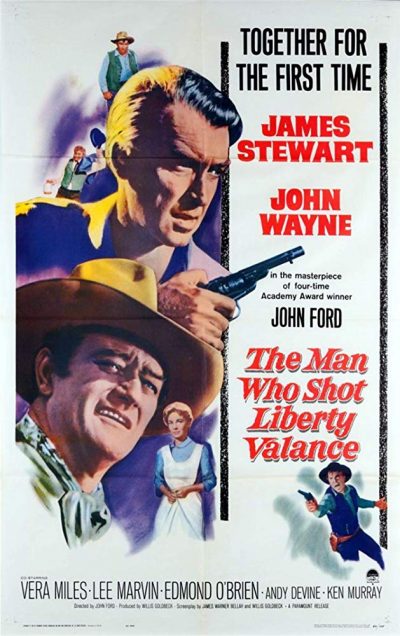 synopsis
Like Pontius Pilate, director John Ford asks “What is truth?” in The Man Who Shot Liberty Valance–but unlike Pilate, Ford waits for an answer. The film opens in 1910, with distinguished and influential U.S. senator Ransom Stoddard (James Stewart) and his wife Hallie (Vera Miles) returning to the dusty little frontier town where they met and married twenty-five years earlier. They have come back to attend the funeral of impoverished “nobody” Tom Doniphon (John Wayne). When a reporter asks why, Stoddard relates a film-long flashback. He recalls how, as a greenhorn lawyer, he had run afoul of notorious gunman Liberty Valance (Lee Marvin), who worked for a powerful cartel which had the territory in its clutches. Time and again, “pilgrim” Stoddard had his hide saved by the much-feared but essentially decent Doniphon.It wasn’t that Doniphon was particularly fond of Stoddard; it was simply that Hallie was in love with Stoddard, and Doniphon was in love with Hallie and would do anything to assure her happiness, even if it meant giving her up to a greenhorn. When Liberty Valance challenged Stoddard to a showdown, everyone in town was certain that the greenhorn didn’t stand a chance. Still, when the smoke cleared, Stoddard was still standing, and Liberty Valance lay dead. On the strength of his reputation as the man who shot Valance, Stoddard was railroaded into a political career, in the hope that he’d rid the territory of corruption. Stoddard balked at the notion of winning an election simply because he killed a man-until Doniphon, in strictest confidence, told Stoddard the truth: It was Doniphon, not Stoddard, who shot down Valance. Stoddard was about to reveal this to the world, but Doniphon told him not to. It was far more important in Doniphon’s eyes that a decent, honest man like Stoddard become a major political figure; Stoddard represented the “new” civilized west, while Doniphon knew that he and the West he represented were already anachronisms. Thus Stoddard went on to a spectacular political career, bringing extensive reforms to the state, while Doniphon faded into the woodwork. His story finished, the aged Stoddard asks the reporter if he plans to print the truth. The reporter responds by tearing up his notes. “This is the West, sir, ” the reporter explains quietly. “When the legend becomes fact, print the legend.” Dismissed as just another cowboy opus at the time of its release, The Man Who Shot Liberty Valance has since taken its proper place as one of the great Western classics. It questions the role of myth in forging the legends of the West, while setting this theme in the elegiac atmosphere of the West itself, set off by the aging Stewart and Wayne.