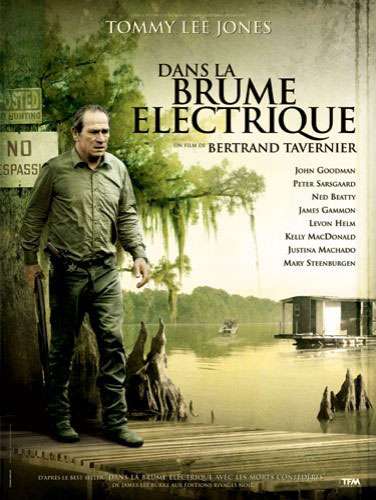 Quote:
A detective tracking a serial killer who preys on young women finds his investigation complicated by a glamorous Hollywood starlet and a ruthless crime kingpin in director Bertrand Tavernier’s adaptation of the James Lee Burke novel In the Electric Mist with Confederate Dead.

Quote:
The mise-en-scene—the swampland—stretches out almost to infinity, like those videogames where you leave the left side of the screen only to enter back around on the right side: the roads, towns, houses and bars of In the Electric Mist aren’t on any map, are unanchored by geography and float free in Tavernier’s world of anguished guilt that detective Tommy Lee Jones thinks he hallucinates his way through. And perhaps that’s the film’s best framing device. Jones wanders around trying to solve a serial killing, gets mixed up in a movie production and suspects a crooked millionaire, but when he finally starts seeing visions of an affable Confederate general giving weary, kindly advice about loss and greed, that’s not when In the Electric Mist takes it too far but rather when the film finally puts its entirety, its Euro-ambivilance, into an exciting form: hallucination. Were not Philip Marlow’s pathways through L.A. any less happenstance and imaginative than a “trip”? Was Kubrick’s Overlook not a place where time and space had no meaning? And are these devices of genre and of subjectivity not perhaps one of the most expressive ways of digging into the devices American cinema uses to color and disguise national history? Strange questions, to say the least, but In the Electric Mist is a strange film, which says something.