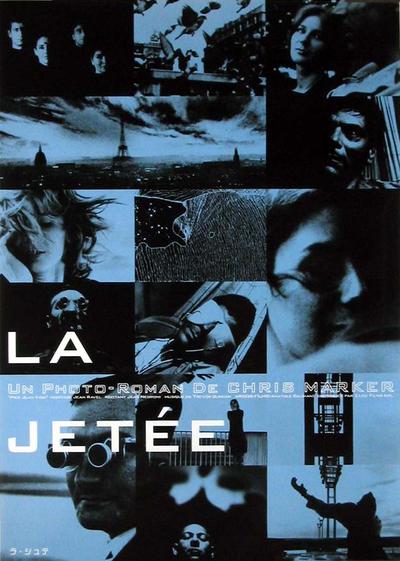 Quote:
“This is the story of a man marked by an image of his childhood,” begins La Jetee (1962), one of the most instantly recognizable and acclaimed short films ever made. Using only still photographs, voiceover narration, sound effects and music, it tells the story of a World War III survivor whose vivid memories make him the subject of time travel experiments. In only one shot of the film–that of “the Woman” opening her eyes in the morning–does the image move. Through such deceptively simple means Chris Marker explores the paradoxes of time travel and, on a deeper philosophical level, the relationships between image and memory, and word and image.

The film’s remarkable technique–a series of still photographs edited together like a normal film–has roots in the mundane French literary genre of the photo-roman (photo-novel) as the opening credits indicate. This is a kind of comic book, made using photos instead of drawings, that was especially popular in France and French-speaking Canada during the Sixties and Seventies. Although the genre never caught on to the same extent in English-speaking countries, it was phenomenally popular in postwar Italy under the name fotoromanza. Incidentally, Federico Fellini satirized the clichéd romantic content of the Italian fotoromanzi in his first solo directorial effort, The White Sheik (1951). The genre is still popular in Mexico under the name fotonovela. The Mexican fotonovelas, not unlike their Italian cousins, have straightforward gender-based appeal in the forms of Western/action and romance stories. Considering that La Jetee is itself a science fiction story, it seems likely that Chris Marker’s reference to a “disreputable” popular literary genre is very much deliberate.

Chris Marker has kept his biography largely a mystery and he rarely ever grants interviews, but since the Fifties he has amassed a unique body of essay-style documentaries; La Jetee is one of his few forays into the realm of fiction film. Born Christian Francois Bouche-Villeneuve in 1921, he studied philosophy and fought in the French resistance during World War II. He then served as a critic for the leftist Catholic journal Esprit and later for Cahiers du Cinema with Andre Bazin. Often considered part of the so-called “Left Bank” school of filmmakers, which include Alain Resnais and Agnes Varda, he co-directed the short Statues Also Die (1953) with Resnais and served as the assistant director on Resnais’ Night and Fog (1955). While Marker has displayed a close affinity with the left throughout his career, it has typically been in an intellectually probing, at times dryly humorous way, as one can see in documentaries such as Letter to Siberia (1957), Le Fond de l’air est rouge/The Grin Without a Cat (1977), and The Last Bolshevik (1993). He has also experimented with the short story, the novel, and multimedia projects such as the much sought-after CD-ROM Immemory (1998).

While La Jetee contains no speaking parts and its lead couple Helene Chatelain and Davos Hanich were virtual unknowns at the time of its production, it does feature some notable supporting cast members. Willliam Klein is the American-born director of French cult films such as Qui etes-vous, Polly Magoo? (1967) and Mr. Freedom (1969). Etienne Becker is a prolific cinematographer and the son of the great French director Jacques Becker. And Ligia Borowczyk is the widow of Walerian Borowczyk, the late Polish-born director of animation and surreal erotica. She played starring roles in his films Goto, Island of Love (1968) and Blanche (1971), the latter an unsung masterpiece of European art cinema.

The haunting score for the film in fact consists entirely of stock music cues, as somehow befits a film in the science-fiction genre. In addition to Russian choral music by the Saint Alexander Nevsky Cathedral choir, it features several music cues by the popular British composer Trevor Duncan. Born in 1924 as Leonard Charles Treblico, Duncan became known for his work with the BBC and for his instrumental music in the early 1950s. Duncan composed scores for a number of feature films, among them Joe MacBeth (1955), an adaptation of the Shakespeare play set in the gangster milieu. But his music was also widely borrowed as stock music cues for cheap science fiction and horror programmers such as Ed Wood’s notorious Plan 9 From Outer Space (1959).

Finally one would be remiss in not acknowledging that La Jetee served as a primary source of inspiration for Terry Gilliam’s Twelve Monkeys (1995), with its unusually literate script by David and Janet Peoples. While that film is striking in its own way for its baroquely detailed, apocalyptic vision of the future, it’s all the more remarkable how Chris Marker’s film, shot on a far lower budget and with radically limited means and less than a quarter of the running time of Gilliam’s film, somehow achieves a deeper impact. It’s a tribute to power of film to provoke the viewer’s imagination, and to the originality of Marker’s vision.