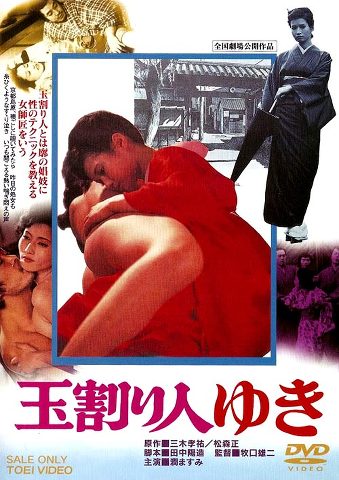 Kentai wrote:
Based on a porno manga by Kosuke Miki and Tadashi Matsumori, this pair of short features follow the adventures of Yuki, who works in a Kyoto red-light district house of ill repute as a “tamawari,” or “virgin-breaker.” She’s the gal who gets first dibs on the new recruits to the brothel (some willing, some not), and it’s her job to break them in for future clients. The first film finds Yuki involved with a group of political rebels, and in the slower sequel Yuki thinks she’s finally found love after some studly service, but as you might expected, things don’t quite turn out the way she expected.

The first two films from director Yuji Makiguchi, these over-the-top sexploitation entries aren’t as humorous or crazy as the works of fellow Toei filmmakers Norifumi Suzuki or (ahem) Teruo Ishii, but walk a very fine line between black humor and severe cruelty.

quaisnord wrote:
This film depicts prostitutes and anarchists in Kyoto just after the Peace Preservation Law was passed in 1925, and a strange symmetry between a virgin breaker whose mind sways between her profession and love and a carpenter who prevents love.
The dialogue is spoken mostly in the Kyoto dialect. The song sung by a young anarchist is the dormitory song of Kyoto University.