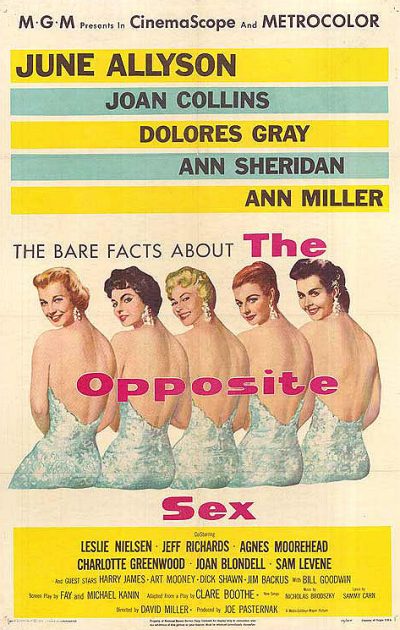 Plot: Shortly after their tenth wedding anniversary, New York theater producer Steven Hilliard and his wife, former popular radio singer Kay Hilliard née Ashley, are getting a Kay-initiated Reno divorce after Kay finds out about a marital indiscretion he had with Crystal Allen, a gold digging chorus girl in one of his shows. News of the indiscretion made its way to Kay indirectly by her catty friend, Sylvia Fowler. In Kay getting the divorce, Kay’s best friend, playwright Amanda Penrose believes Kay is playing right into the wants of Crystal, whose main goal is not to be happily married to Steven, but to get what such a marriage can bring to her in material wealth and comfort. Amanda does not believe Steven loves Crystal and that he still really does love Kay. And Kay does proceed with the divorce despite believing theirs was a happy and loving marriage before she learned of the indiscretion, and despite having an adolescent daughter, Debbie, to consider. But when Kay learns some information of the goings-on within her social circle, she decides to take back control of her married status while exacting a little revenge. Written by Huggo

Kay Hilliard, a former nightclub singer, married ten years and mother of a young daughter, is informed that her husband Steve is having an affair with chorus girl Crystal, so she goes to Reno for a divorce. After that, Steve marries Crystal, but Crystal isn’t true. When Kay hears about this, she starts fighting to win her ex-husband back. Written by Anonymous