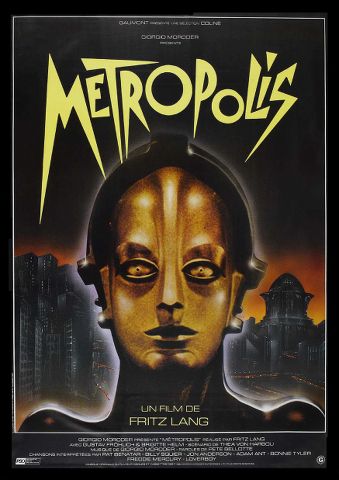 “Metropolis is not one film, Metropolis is two films joined by the belly, but with divergent, indeed extremely antagonistic, spiritual needs. Those who consider the cinema as a discreet teller of tales, will suffer a profound disillusion with Metropolis. Whait it tells us is trivial, pretentious, pedantic, hackneyed romanticism. But if we put before the story the plastic-photogenic basis of the film, then Metropolis will come up to any standards, will overwhelm us as the most marvelous picture book imaginable.”
— Luis Buñuel: Metropolis. In: Great Film Directors. Edited by Leo Braudy, Morris Dickstein. New York 1978, p. 590

“… In its own time Metropolis was clearly more of an event than Kubrick’s masterwork [2001] was in 1968 — an attempt to beat Hollywood at its own game that took well over a year to shoot, reportedly used up to 30,000 extras, and sabotaged the career of the most talented and prestigious producer of silent German cinema, Erich Pommer, who lost his job at UFA after the film went so far over budget it could never earn back its investment. The astonishing thing is that Metropolis seems much more relevant to current events than 2001, which assumed that the cold war would still be going on. Metropolis emphasizes not merely class divisions, but the emotional confusion underlying the creation of androids — also a major theme of A.I. Artificial Intelligence. 2001 dramatizes some of the same confusion, but the female robot in Metropolis, the false Maria, has much more in common with A.I.’s Gigolo Joe than she (or it) has with 2001’s talking computer HAL (though someone ought to examine HAL’s and Gigolo Joe’s sexual ambiguities).
Not that the film was a flawless masterpiece in 1927. Indeed, Metropolis has one of the lamest endings of any great film I can think of, and this has survived intact in virtually all of the intermediate versions … a lot of confusing plot points have led most critics to regard the film as irredeemably silly, even when they admire the breathtaking visuals. Lang’s own disparagement of the film did nothing to discourage this verdict. But as the longer version shows, however naive the film’s socialist notions might be — most of them are built around Freder’s belated discovery that his father exploits workers — its post-Freudian contours and narrative conceits remain highly sophisticated.