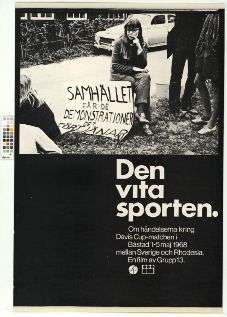 The question the filmmakers wishes to explore is if sports and politics don’t mix, with the Davis Cup tennis matches between Sweden and Rhodesia as a backdrop. Of course the answer is already given – sports are politics as much as anything that goes down in society as a whole. Naturally, politicians and sports organizers disagree, but a regular but diverse army consisting of angry students, self-righteous liberals and crazed fanatical Maoists set their course toward the small beach resort Båstad. Here, things go really ugly as the demonstrators are determined to stop the match at any cost.

This film is not just a film that documents a riot between leftist students and the police in Båstad – this is the closest thing anyone got in making a documentary about the Paris near-revolution in ’68. That is truly revolutionary.