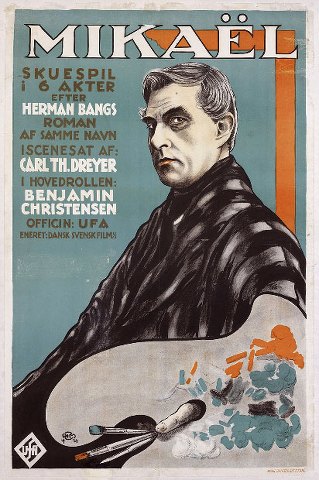 Quote:
Another German Contribution
German producers delight in taking an occasional fling at France, England and Russia by filming stories dealing with historical characters who were not exactly a credit to their respective countries, even though they did furnish colorful inspiration for plays and novels. The latest stab in this connection is contained in a production now known as “Chained,” the incidents in which are said to be based on the life of Auguste Rodin, the French sculptor.

“Chained” is a dull piece of work, redeemed only by some artistic scenes and Benjamin Christensen’s able portrayal of Claude Zoret, an artist. The other players are hardly suited to their respective rôles, with the possible exception of Robert Garrison, who figures as Zoret’s critic and friend. The actress cast as a princess does not screen well, and Walter Slezak, who figures as the youth, gives a stilted, amateurish impersonation.

If the producers were bent on delivering such a theme to the screen, it might have been vastly more to their advantage to picturize Oscar Wilde’s story, “The Picture of Dorian Gray,” or Robert Hichens’s novel, “The Green Carnation,” two works which, distasteful though they may be, at least possess real dramatic values.

“Chained,” which has been known as “The Invert” and “Michael,” was directed by Carl Dreyer, who, while he has succeeded in rendering effective touches to some of the scenes, has failed to elicit convincing performances from the woman in the case, as well as from the youth. The story is also handicapped by queer titles. The youth is Zoret’s protégé and model. The Princess fascinates the youth, with the consequence that he absents himself more and more from Zoret’s home.

The settings are quite impressive and the lighting at times is unusually good, especially in some of the close-ups.
Morduant Hall, NY Times, December 15, 1926