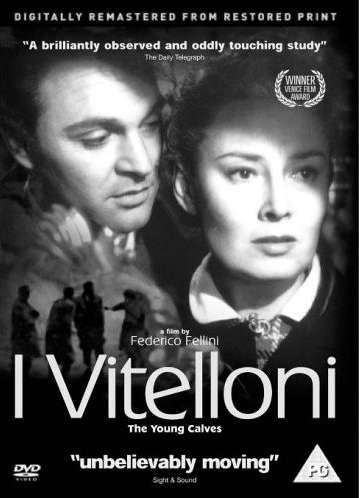 It’s autobiographical in several indirect ways. The depictions here of young men who are not quite so young anymore, living with their mothers, settling for dead-end jobs or simply not working, and generally languishing their lives away, are based on Fellini’s own observations of such fellows in his boyhood home of Rimini. Autobiographical too in its sense of style: the movie is inescapably stamped by the Neo-Realism of Fellini’s apprenticeship. The grimy faces of working-class people, crumbling tenements, and weed-choked rail-yards are all here. But with a difference: Fellini casts a critical eye on this scene, eschewing the usual Neo-Realist appeal to our presumed socialist sympathies. *I Vitelloni* is not a political film in the usual mid-century Italian manner. Fellini gives us a quintet of heroes who, for the most part, aspire to be bourgeois big-shots of their shabby seacoast town. Not content with that, he makes them lazy, as well . . . and then he asks us to root for them, to actually like them! Needless to say, the intelligentsia of the period didn’t warm to this film, even as the film-going public in Europe loved it, recognizing themselves and their friends and their own hometowns in it.

Just as Shakespeare shows us the brilliant results of striving within the non-negotiable limits of the nine-line sonnet or the blank verse of his plays, Fellini achieves genius in this film, stylistically, from the fruitful tension between the dictates of Neo-Realist imperatives (which no young Italian director of the Fifties could ignore if he wanted a career), and the dictates of his own vision. For, even while being a dutifully serious Neo-Realist (even to the point of employing a static, unblinking, non-flashy camera on the proceedings — hardly the “Fellini-esque” style we would see in later years!), the director’s penchant for the grotesque can no longer contain itself. In this film we get the aging, corpulent homosexual actor, with hair in need of a cut, noisily slurping up soup while one of the Vitelloni reads aloud to him some terrible play he has composed. We get the nauseous parties, in which Fellini tosses the Neo-Realist camera in the trash and picks up his own camera, swooping with it into the hot, frantic fray, honing in for sweaty close-ups, climbing the rafters for a dizzying aerial view, skewing the angles while watching an off-key trumpet player blare into the ear of a miserable drunk, and filling the screen with gigantic papier-mache clowns that constitute the floats of a Lenten parade. At the same time, the mandate to keep himself in check, or perhaps the humble desire to make an easily digestible movie, gives *I Vitelloni* the discipline and order so lacking in post-*8-1/2* Fellini films.

But the thematic meat of the movie provides the most fruitful tension. Fellini shows us the Vitelloni, the “guys”, most of them creeping past 30, grasping after any passing pleasure that comes to hand, whether it be a woman (young or old, married or not, willing or not), a drunken night at the local pool hall, an attempt at petty thievery, a day of gambling at the races, or whatever. Then Fellini contrasts this with the older generation, tellingly single (their mates long buried), barely supporting the passel of lazy Vitelloni and assorted nieces and grandchildren who all lay about the family home. The old folks’ sacrifices seem to have produced ignoble results, particularly within themselves: all too often, the old men and women are grouchy, unhappy, prone to fits of violence or weeping, and — saddest of all — lonely. The Vitelloni look at their elders, see the sterile results of lives rendered bereft by tradition and “sacrifice”, and naturally rebel, searching in easy hedonism for the happiness that has eluded their parents. One character, a compulsive womanizer, plans on running away after he knocks up his girlfriend — and why not? The womanizer’s bitter father provides no wholesome example of “responsibility”. Indeed, it seems as if the old man forces his son to marry the girl simply because he, the father, is friends with the girlfriend’s father, and, after all, misery loves company. The question of whether or not the cad actually loves the girl is never asked. Guess how this marriage turns out.

Without unduly spoiling things, one of the Vitelloni actually DOES escape the shabby town by movie’s end, but even here Fellini offers an unequivocal qualification: the character, staring out the window as the train pulls out, hangs his head and weeps. He knows, as do we, that he will be just as unhappy in Rome as he was in this fictionalized Rimini. Meanwhile, a young boy who works at the train station waves goodbye to the leaving train and turns his back on it, balancing precariously on a rail as he boyishly walks off. Fellini indicates that some people will simply be happier than others, no matter the circumstances: truly one of cinema’s bleaker statements on the human condition.

*I Vitelloni* remains a great masterpiece, and is Fellini’s most neglected film . . . though it somehow seems fitting that a movie which virtually INVENTED the notion of “slackers” should be forgotten. No matter: perfection is rarely popular, anyway. [IMDB] 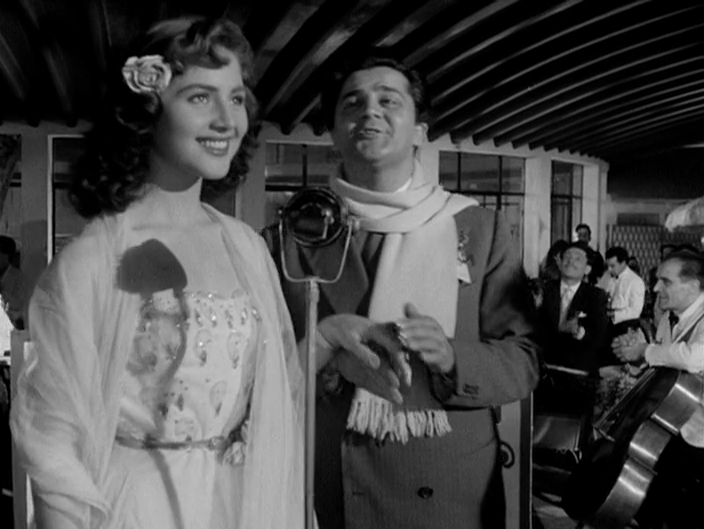 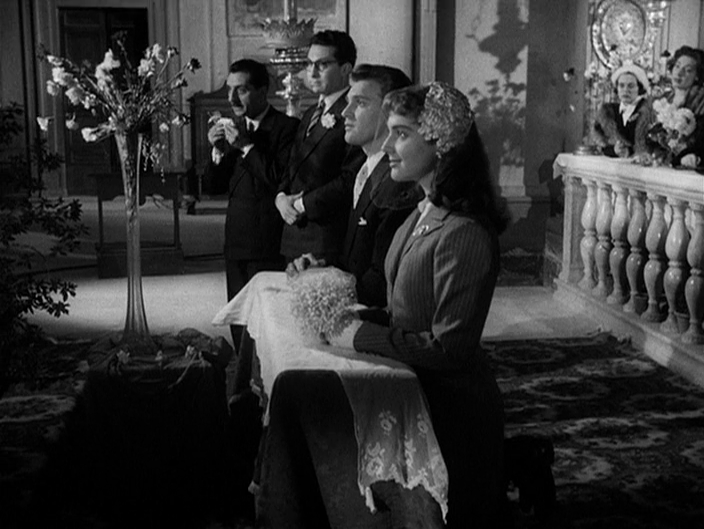 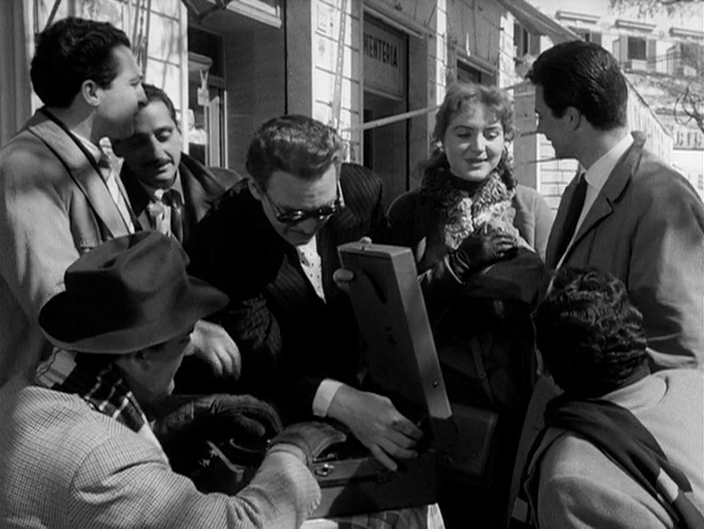 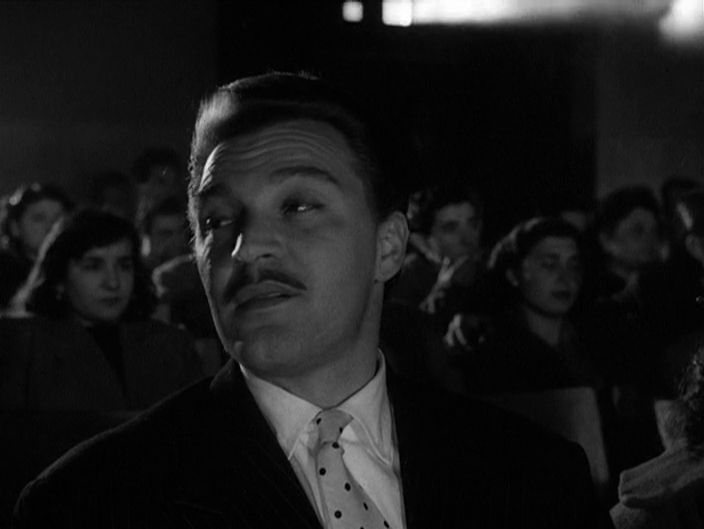 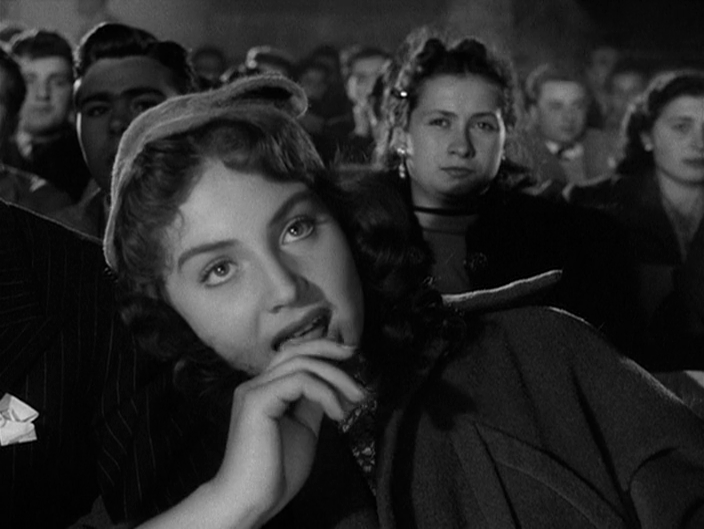 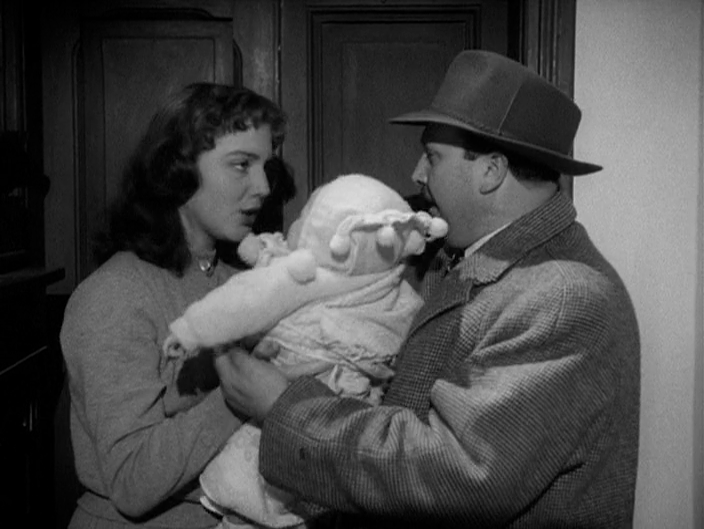