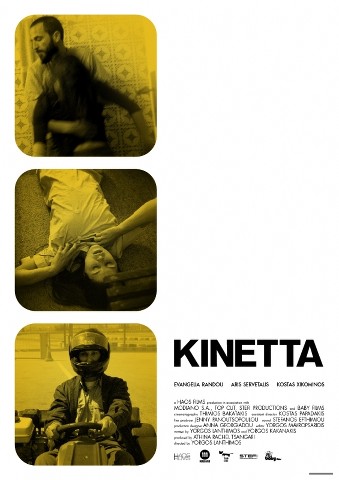 filmfestival.gr wrote:
Kinetta. A defunct Greek resort town, inhabited during the off-season by migrant workers. A plain-clothes cop, with a passion for automobiles, tape recorders and Russian women, investigates a series of recent murders in the area. He enlists the help of a photo-store clerk, a loner type who is a part-time videographer, and a young hotel maid, who will be performing the role of the female victims. This oddball trio engages in a succession of murder re-enactments, directed by the cop with exhaustive attention to detail but questionable scientific purpose.

filmref.com wrote:
“Something of a hybrid between Tsai Ming-liang’s eccentric, temp morts snapshots of human idiosyncrasy crossed with the glacially paced visual abstraction of Sharunas Bartas by way of Philippe Grandrieux’s murky, destabilized, and defocused gaze”

Review
d-kaz.com wrote:
Giorgos Lanthimos’ feature film debut enwraps a fascinating premise with undeveloped, elliptical, and near wordless banality. The starting point—which is so good it essentially carries the film—is that in a Greek vacation town during the off-season a policeman (Costas Xikominos) enlists a cameraman (Aris Servetalis) and a hotel maid (Evangelia Randou) to help him restage several unsolved murders. The policeman verbally walks the maid through the scenes step by step— “Now he grabs for her right arm as she turns to crawl away, she kicks up with her left foot hitting him in the chest” that kind of thing—with himself playing the murderer. The reenactments are brutally slow, as if the people are rehearsing a fight sequence that they will later film with more fluidity, even though the cameraman is filming these awkward, stilted reenactments. The retarded movement of the “actors” aligns itself to Kinetta’s distinctive photography, by Thimios Bakatatakis, which is entirely handheld and often quite zoomed in. The effect is one of constant jittering and intended unsteadiness, a visual feeling that makes the characters’ “normal” movement through space look nearly as bizarre as their slow motion groping during the forensic scenes. […]

It’s like Lanthimos crammed together several how-to crib sheets from various types of oblique art films: suffocating anonymity and social alienation, deadpan and quirky character traits, unrequited passions and desires muted through passivity and effacement of identity. All suggested; none used. The problem may be that these are all thematic and audio-visual motifs of urban films, and this film distinctly takes place nowhere near the rest of humanity. If these characters were plunked down in a city their behavior would all be signatures of urban malaise, however poorly written; in Kinetta it comes off simply as small town boredom.

The most interesting feature of the movie is, of course, the “forensics.” The fact that no one actually seems to want to, or try to, solve the crimes, is not only amusing but it seems to place the re-enactments as moviemaking, playacting, fantasy, escapism, and physical interactive specificity at the forefront of Kinetta. But it is never clear what anyone gets out of their hobby, aside from the policeman’s desire to direct with authority, the cameraman’s desire for the maid, and the maid’s aimless life briefly put under control. But since the crime/moviemaking aspect of Kinetta is downplayed considerably compared to the oblique “development” of the characters—there are only three re-enactment scenes, and another three intriguing scenes of the maid “practicing” her death—it is difficult to focus on the ingenious scenario device and find the power that clearly exists in it. The play between the practiced violence in the re-enactments and the improvisatory photography is fascinating, especially in a lovely and one-of-a-kind scene in the film where the barely in-focus photography, deeply zoomed in and backed on the audio track by a pop song, shoots the maids bobbing head against the shimmering Greek water, the landscape momentarily coming into beautiful clarity and then going out of focus into starry points of light so we can see the maid’s head. Only in the next cut, a minute later, do we see that the maid is sweeping the floor inside the hotel and she is on the inside of the window, the bobbing of her head due to her physical task at hand. Such play with the way movement is photographed, its implications on character’s professions and desires and uncertaintites, seems at the crux of the crime scenes, but almost everywhere else in the film Lanthimos seems thematically unfocused, firm in his decision to pare away interest in his film’s characters and their lives when clearly each and every one of them is facing a life crisis. 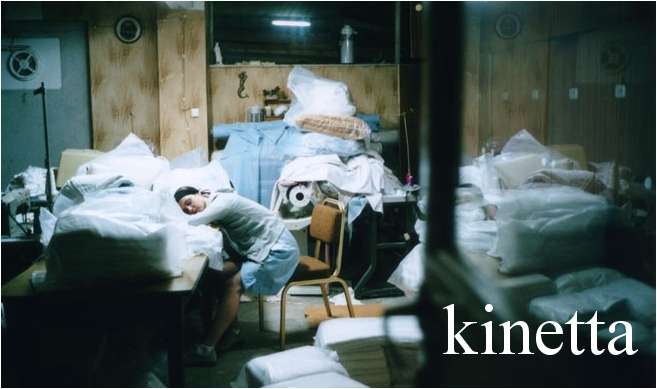 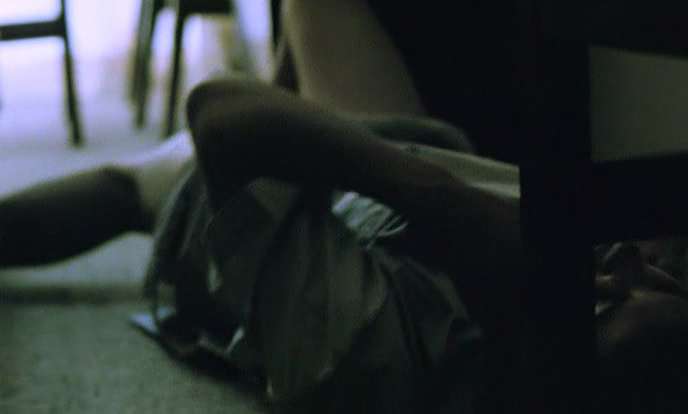 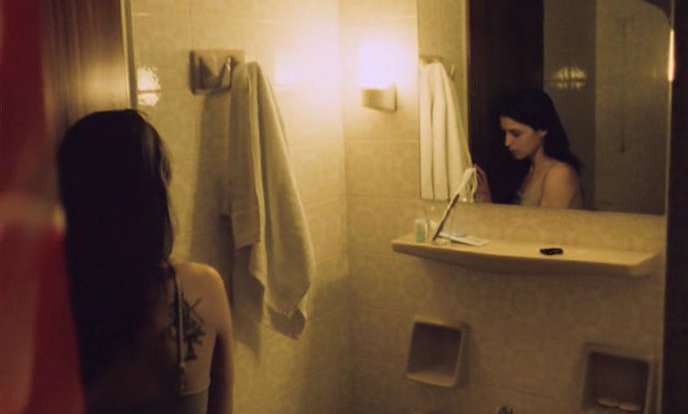 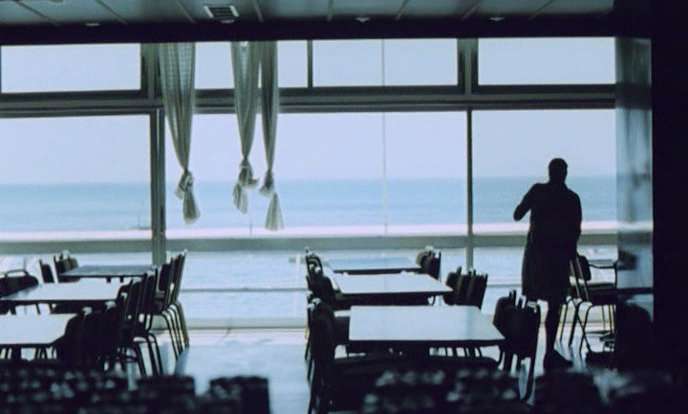 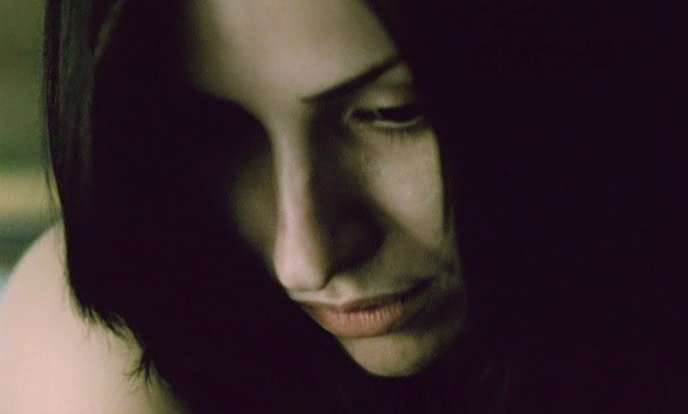 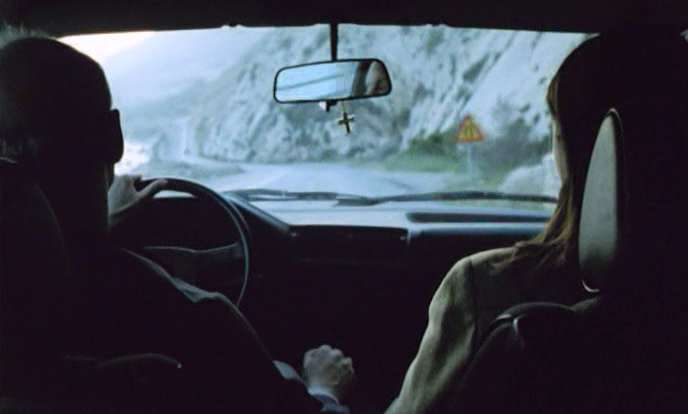 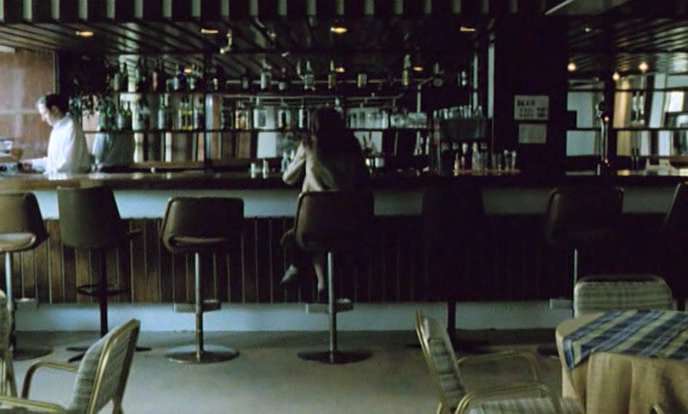