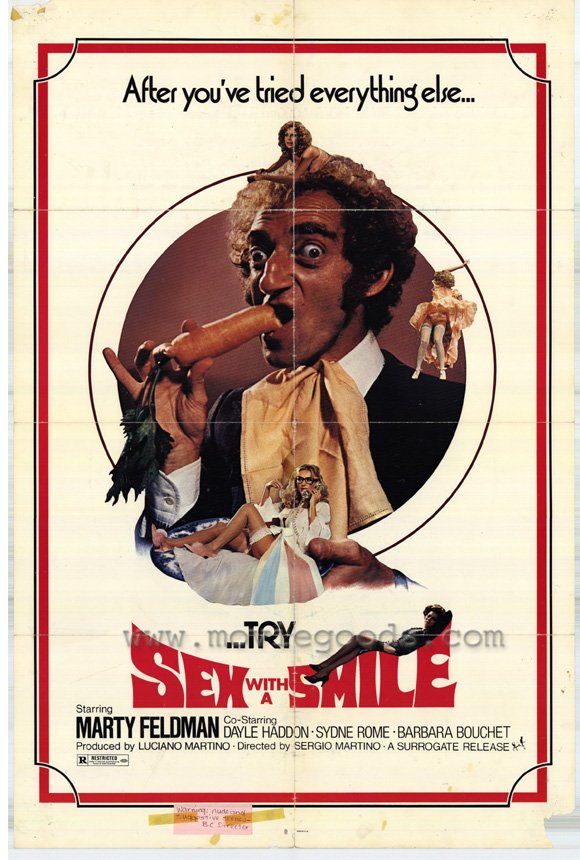 Quote:
Well, it’s not big and it’s not clever – but Sex with a Smile is great fun, and rather funny in places; plus it features performances from five of Italy’s hottest ladies, so what’s not to like? The stories in the film apparently focus on Italian humour, but to me it seemed pretty universal and I think that even people who don’t know anything about Italian humour will find this funny. The film features five separate stories, all involving sex and all ending with a funny and ironic little twist. The stories are all around twenty minutes long, and most of them will raise a smile from the audience. The stories mostly seem to focus on a hot woman bewitching a weak willed man, but when the women in question are Barbara Bouchet, Dayle Haddon, Giovanna Ralli, Edwige Fenech and Sydne Rome – it’s not hard to see things from the male point of view! The film is perhaps not quite as sexy as it thinks it is or wants to be, but there’s no shortage of hot women lolling around in next to nothing and director Sergio Martino manages a lot of nice visuals, which are sure to keep the audience happy.

The first story is one of the best and features Barbara Bouchet as a respectable woman who decides to take a shady man up on his offer of sex for 20 million lire three times, only to find that he’s not exactly playing straight with her! We then move on to Marty Feldman’s bodyguard who takes his job of guarding Dayle Haddon’s socialite very seriously. The tale features a little too much silly slapstick humour my liking, but it’s funny in places and Dayle Haddon is great to look at! The third story is probably the weakest of the five, but nice enough as Alberto Lionello’s chauffeur tries to woo Giovanna Ralli’s countess. Edwige Fenech is up next in a tale aptly titled ‘Dream Girl’, starring alongside Tomas Milian, who really shows his versatility as a geeky guy who dreams about her. Fenech really does look great in this story (almost as good as she did in Martino’s excellent Giovannona Long Thigh) and this is definitely the most erotic of the quintet. The film ends on a high with a story revolving around an overprotective dog, which succeeds in ruining Aldo Maccione’s chances with Sydne Rome. (The [email protected])