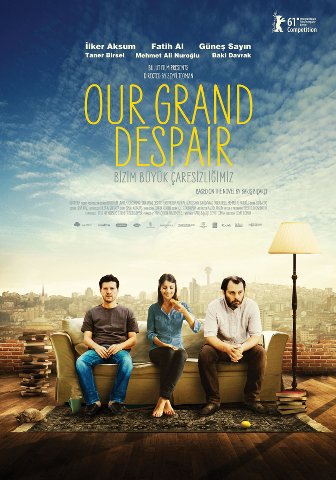 Though hardly an especially significant example of contemporary Turkish cinema, it’ll prove catnip for festivals worldwide and could well click at domestic box offices in its native land.

At its heart of the film, adapted by director Seyfi Teoman from Baris Bicakci’s novel in collaboration with the author, is a long-time friendship between bookish, bespectacled Ender (Ilker Aksum) and his more down-to-earth pal, the bearishly burly Cetin (Fatih Al). Now in their late 30’s, the pair have enjoyed a very close, platonic bond since high school. After several years away, Cetin has moved into Ender’s comfortable downtown apartment in Ankara, the Turkish capital.

They’re soon joined by the traumatized Nihal (Gunes Sayin), sister of their friend Fikret (Taner Birsel), who needs somewhere to stay following the death of her parents in a car crash. The ‘boys’ take some time to adapt to having their bachelor existence compromised by a female presence. (“We’re real pigs,” they realize.) Before long, they discover that they’re both falling in love with the pretty, demure, much younger university student.

Given this premise, Our Grand Despair (Bizim Buyuk Caresizligimiz) relies heavily on the charms of the female lead. While there’s no doubting Sayin’s beauty, her performance as the girl/woman Nihal is simperingly mannered rather than entrancingly seductive. Plus, her inexperience is all the more noticeable alongside the more seasoned male stars.

Indeed, the picture works much better as a portrait of a complex, intense — but never remotely homoerotic — male bond, the kind of relationship which American cinema has only recently started to explore. One can easily imagine the uncrowned king of the bromance sub-genre, Paul Rudd, taking on the Ender role, with maybe Brad William Henke as his Lennie — Steinbeck’s Of Mice and Men is invoked by Ender at one point, which isn’t exactly flattering for the straightforward but far from mentally-retarded Cetih.

Any Stateside redo might want to pep up the ending of a picture, which peters out in pleasant, agreeable style rather than coming to much of a climax. Also problematic throughout is the fact that several key scenes occur off-screen.

Such a transplant would ideally show us a large city we aren’t that familiar with, just as Teoman and cinematographer Birgit Gudjonsdottir (whose work is unfussy and pleasing) show Ankara — long underutilized by Istanbul-centric Turkish directors — as a varied, vibrant and surprisingly scenic modern metropolis, a kind of Anatolian Barcelona perhaps.