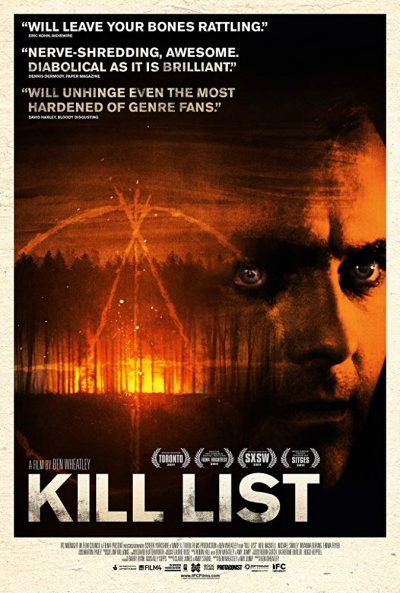 Kill List – review
4/5 stars
If Ricky Gervais or Mike Leigh made a horror film, it might look something like this unsettlingly strange offering from British director Ben Wheatley
The title, and the fact that this was popularly acclaimed at London’s recent FrightFest event, will tip you off about what kind of film it is. Or will it? Even now, I’m unsure how or whether to describe it generically. It’s partly an occult chiller with shades of Wicker Man and Blair Witch – and be warned right now: there are some ultra-violent and infra-retch scenes that have had people making for the exits. I wondered if director Ben Wheatley considered putting a death metal version of Maxwell’s Silver Hammer over the closing credits.

Yet Kill List is also something else entirely. It often looks like a film by Lynne Ramsay or even Lucrecia Martel, composed in a dreamily unhurried arthouse-realist style that is concerned to capture texture, mood and moment. The long expository scene looks like the beginning of a downbeat, miserablist film whose only object is to tell the story of a married man attempting to recover from depression through rebuilding friendship and re-entering the world of work. And in some sense this could be what Kill List is. But the drifting scenes of ordinariness are especially disquieting, both while they are happening and in retrospect, after the nightmarish situation has begun to reveal itself, and after the brutal explosion of violence.

Perhaps inspired by Thomas Clay’s The Great Ecstasy of Robert Carmichael, Wheatley has set out to supersaturate ostensible normality with a flavour of evil. In many scenes he succeeds impressively. It’s not entirely clear if Kill List is more than the sum of its startlingly disparate parts, or if the ending lives up to the promise of something strange and new, but its confidence is beyond doubt.

Neil Maskell and Michael Smiley give very good performances in the lead roles of Jay and Gal, two men who are best mates and professional colleagues, though their friendship is fraught, to say the least. Gal is a Northern Irish guy who is humorous, laid-back and relatively calm; Londoner Jay is moody, anxious, resentful and depressed. After a year of unemployment, Jay is going spare in a boxy detached house in the middle of the suburban sprawl, which he shares with his Swedish-born wife, Shel (MyAnna Buring), and their young son. The action begins mysteriously to accelerate when Gal shows up with his new girlfriend, Fiona (Emma Fryer), for a dinner party at Jay and Shel’s house, a dinner party that shows every sign of becoming a tense and embarrassing disaster. Wheatley and his co-writer Anna Jump sketch this out with a Mike Leighish shrewdness and wit. The dialogue is partly credited to the cast, so some lines are presumably improvised: this could have been true of the brilliantly toe-curling moment when Jay complains to Shel about spoiling their dinner table display by putting out a measuring jug of gravy, “like a chemistry experiment”.

As well as conjuring bourgeois social tension, Wheatley discloses that Jay’s unemployment is self-imposed. A previous job they did together a year before had gone very wrong. But Gal wants Jay to get a grip, to get back on the horse. They have had a new and lucrative offer of work from a shadowy client: work for which they are highly qualified.

This new job is to lead them into situations of extreme fear and revulsion, but also into extreme banality and boredom. Wheatley’s trick is to suggest the banality is never quite extinguished by the fear; the fear leaches into the dullness and the normality. Somehow, Jay’s visit to the GP is one of the film’s most unsettling scenes. Jay and Gal have to do a lot of travelling around the country on behalf of their employer and stay in featureless chain hotels with soul-sappingly dull interiors. The conversations they have there are appropriately tedious, yet always hint at the horror of what they are doing. Gal asks Jay if the soap in the bathroom is in a sealed packet and is relieved to find that it is: “I hate dirty soap.” Later, when driving back after a difficult engagement, he sharply asks Jay if he knows the sign of a good painter and decorator: clean overalls. A competent professional does not make a mess. The Wheatley double act is very different from a Tarantino double act or a Pinter double act. Jay and Gal are closer in spirit to Gervais and Merchant.

The moodscape of Kill List is inspired, the climax less so, and the more like a conventional scary movie it becomes, and the more clearly it reminds you of other scary movies, the less effective it is. But Wheatley is so distinctive a film-maker, and Michael Smiley and Neil Maskell gently create a convincing friendship: two men, pathetically dependent on each other’s company, yet often scrapping like 10-year-olds. There is a superb moment when it all kicks off in Jay’s kitchen and one man actually grabs a mug from the twee little mug tree and smashes it over his friend’s head. They’re all friends again in a little while, yet a bizarre and inexplicable miasma of evil continues to wash over them. As far as British horror goes right now, Kill List is pretty much top of the range.
Peter Bradshaw, guardian.co.uk, Thursday 1 September 2011