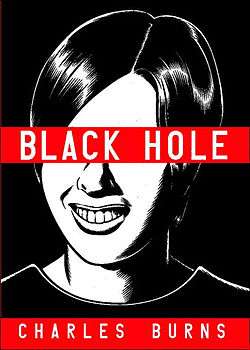 Quote:
November 7, 2005 | “Everything’s either concave or -vex,” the Danish poet Piet Hein once wrote, “so whatever you dream will be something with sex.” In Charles Burns’ decade-in-the-making graphic novel “Black Hole,” the natural concavity and -vexity of everything leaps out at you: Nearly every image is a sexual metaphor, with the distorted clarity and mutability of a nightmare. And sex in “Black Hole” also means body horror, sickening transformations and loss. The first page’s abstraction — a thin, wobbling slit of light on a black background — opens up to become wider and fleshier, then to become a blatantly vaginal gash in a frog on a dissecting pan (surrounded by pools and pearls of liquid). That’s only the beginning of the book’s array of weenie roasts and clumsy tongues and trees leaning away from each other like spread legs.

Burns originally serialized “Black Hole” as a 12-issue comic book series, beginning in 1995; a New York Times Magazine article last year offhandedly compared its reputation in the comics world to that of “Ulysses.” That’s not a particularly useful analogy, not least because Burns’ narrative gifts are much more visual than verbal. The only thing the two books really have in common is a formally audacious structure, with a chronology complicated enough that it takes a few readings to work out. (“Black Hole” is riddled with flashbacks, flash-forwards, and multiple perspectives.) What made each issue of the comic worth the long wait was its sustained tone. Chip Kidd (who designed the jacket), speaking on a panel this summer, pointed out that Burns had managed to keep his drawing style perfectly consistent for the 10 years it took to finish. The mood of the story moves in a slow, graceful arc from its initial plunge into repulsion to its final glints of hope; every panel suggests that Burns knew what it would look like from the moment he began the book.