Masaki Kobayashi – Ningen no jôken AKA The Human Condition III: A Soldier’s Prayer (1961) 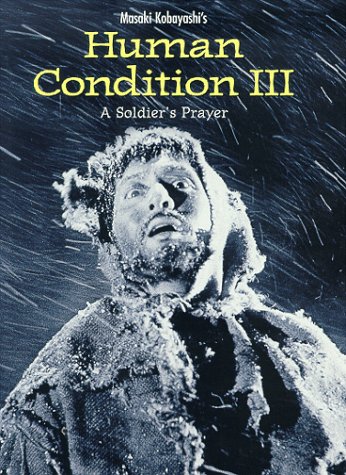 Hal Erickson on All Movie Guide wrote:
A Soldier’s Prayer (Ningen No Joken III) was the final entry in Japanese filmmaker Masaki Kobayashi’s Human Condition trilogy. As in 1958’s No Greater Love (see entry 23818) and 1961’s The Road to Eternity (see entry 23819), the protagonist is the pacifistic Kaji, played by Tatsuya Nakadai. Strong-armed into the Japanese military during World War II, Kaji has reluctantly learned to kill on the battlefields. Upon his country’s surrender, Kaji gives himself up to the Russian troops, hoping to receive better treatment than he had at the hands of his Japanese superiors. But his hopes are dashed once more, and he is subject to cruelty upon cruelty while imprisoned in a Manchurian POW camp. A Soldier’s Prayer, like its predecessors, was based on the epic multipart novel by Jumpei Gomigawa. In sum total, the three Human Condition films run for nearly ten hours.