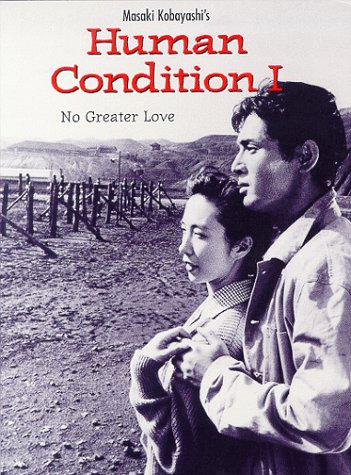 Hal Erickson on All Movie Guide wrote:
Originally titled Ningen No Joken, No Greater Love is the first of Japanese filmmaker Masaki Kobayashi’s Human Condition trilogy. Drawing from his own experiences, Kobayashi weaves the tale of a Japanese pacifist, trying to get by as best he can during World War II. Tatsuya Nakadai plays the leading role of a mine supervisor, whose kindly treatment of POW laborers incurs the wrath of his superiors. As the war in the Pacific rages on, Japan begins suffering heavy losses and military humiliations, yet still Nakadai adheres to his principles. Ultimately overwhelmed by events, Nakadai is horribly mistreated by the powers-that-be, then ordered to don a uniform and fight for his country.

2013-01-18
admin
Previous: Norbert Weber – Im Lande der Morgenstille AKA In the Land of Morning Calm (1925)
Next: Masaki Kobayashi – Ningen no jôken AKA The Human Condition II: Road to Eternity (1959)