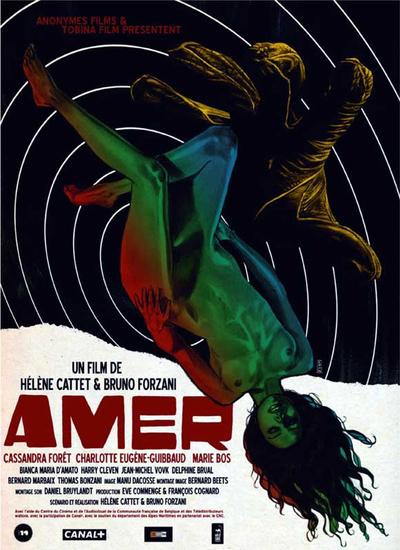 Amer moves relentlessly and dissonantly, and practically sans dialogue. In a gorgeous Italian manse, curiosity threatens to get the better of young Ana, tormented by the unknowable and what it reveals—or doesn’t, as is the case much of the time here. Running from the clutches of the strange woman who catches her hovering over the body of the dead man who appears to be the girl’s grandfather, she runs upstairs to her parents only to find them fucking. The camera shows them every way but upside down, bathed in green, then red, then blue—a show of grossly horned-up excitement meant to be absorbed like a blunt-force trauma. And once Ana has dutifully internalized their freakish sexcapade (her wide eyes tell no lies), it’s back to avoiding the perpetually leering gaze—and sinister clawing—of the woman who lives in the room adjacent to her sparely furnished own. Will the pocket watch she pulls from her grandfather’s brittle clutches save her or will her veiled tormentress simply use it as a means of dragging her to hell?

Amer reveals its matryoshka doll-like intentions when a tiny ant crawls out of Ana’s navel. The camera pulls back only to show her older, traipsing along a road with her mother, ostensibly near the property seen at the start of the film. In a store, a young boy uses his bouncing ball as an excuse to rub up against the nubile, bored teenager; when the twerp loses the ball, she chases after it in anger, and when she finds it, she meets the gaze of a group of obvious male models posing as motorcyclists. Neither the men nor the girl are coherently pictured, as the filmmakers giddily abstract the landscape of the body and land, but you feel the sexual energy that passes between them like a magnetic force (even the sun makes moves on the girl, reflecting light from the metal of the hot rods onto her breasts). The girl’s slow-mo catwalk strut before the line of men is the film’s audio-visual tour de force, ending with Ana’s mother slapping the girl for either feeling lust, or maybe out of jealousy (her husband—and Ana’s father—is, after all, conspicuously absent). It’s here that you understand this kaleidoscopic freak show, indebted as much to Argento and Bava as it is to Cronenberg, Deren, and Brakhage, as a study in sexual cause and effect.