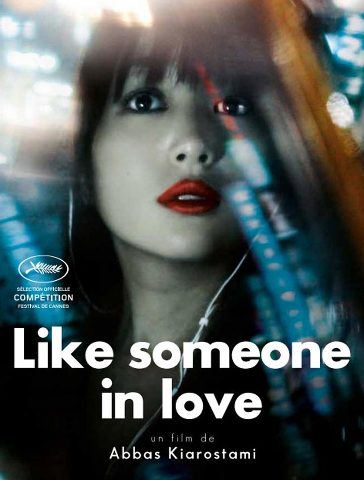 Synopsis
An old man and a young woman meet in Tokyo. She knows nothing about him, he thinks he knows her. He welcomes her into his home, she offers him her body. But the web that is woven between them in the space of twenty-four hours bears no relation to the circumstances of their encounter.
Festival de Cannes.com

Reviews
According to Martin Scorsese, “cinema is a matter of what’s in the frame, and what’s out.” The Iranian filmmaker Abbas Kiarostami applies this axiom with particular rigor. In the first scenes of Mr. Kiarostami’s latest feature, “Like Someone in Love,” we are very much aware of what is not in the frame. We are in a Tokyo bar, listening to a series of conversations that involve a woman we cannot see… he structure of the film is, by Mr. Kiarostami’s standards, fairly straightforward, even conventional: it has a teasing start, an expository middle and a startlingly (though not unpredictably) dramatic end. And yet every shot — everything you see, and everything you don’t — imparts a disturbing and thrilling sense of discovery.

It must have bugged Iranian auteur Abbas Kiarostami that, with Certified Copy, he had strayed perilously close to making a commercial film. If so, he’s set the record straight and saved his reputation as an abstruse, impenetrable arthouse director with this Japanese-set follow-up, which was greeted with a mix of bafflement and boos at its Cannes competition press screening… Like Someone In Love is still a long, slow slog, in comparison with which a film like A Taste Of Cherry seems positively adrenalin-fuelled. Compensations for patient cineastes include the film’s exquisite mise-en-scène and its tendency to generate post-screening discussions on what the… it was all about. But these are straws for distributors to grasp at, and the film is unlikely to generate anything like the business drummed up by Certified Copy…
Lee Marshall, ScreenDaily.com

Not entirely satisfying as either an academic or an emotional exercise, “Like Someone in Love” offers its most complete pleasures as a quietly pristine showcase for Kiarostami’s undiminished craft, its most laborious stretches still wowing with their poised camera placement and confidently spare editing schemes. (Kiarostami’s son, Bahman, is once more holding the scissors.)
This being a Kiarostami film, long, unbroken takes of characters driving or being driven are the order of the day, peaking with a bravura cross-city sequence in the back of a taxi, Tokyo’s familiar chaos of lights coloring Akiko’s face as she checks her voicemails in real time. Abetted by Toshihiro Isomi’s geometric, wheaten-hued production design, lenser Katsumi Yanagijima, best known for more ostentiously impressive work on Takeshi Kitano’s films, gives the proceedings an airy, brisk feel, precise even in its murk — a paradox that could as easily be applied to the film’s storytelling
Guy Lodge, Variety

…Shot entirely in Japanese with Japanese actors in Tokyo, the film is eccentric even by Kiarostami’s standards. A brief synopsis of the plot’s premise makes it sound straightforward enough: a young student having trouble with money, exams, a visiting grandmother and a jealous boyfriend, is reluctantly persuaded by the bar owner who acts as her pimp to visit an elderly man of – it’s said – some import. But right from the opening scene, in which it’s impossible for a while to tell who’s speaking (it’s the girl, offscreen), what’s evident is that Kiarostami is once again taking an intriguingly oblique approach to his material…
Geoff Andrew, TimeOut