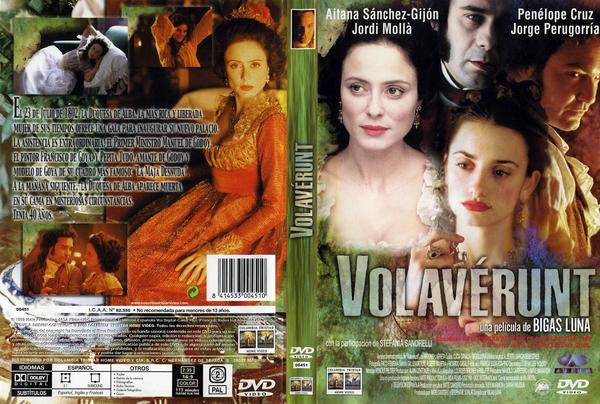 Based on a historical novel by Antonio Larreta, Volaverunt imagines a number of romantic misadventures that enlivened the court of King Carlos IV, a Spanish ruler of the early 19th century. As the story opens, the beautiful Duchess of Alba (Aitana Sanchez-Gijon) is sharing a coach passing through Andalusia with artist Francisco de Goya (Jorge Perugorria), Prime Minister Manuel de Godey (Jordi Molla), and Pepita Tudo (Penelope Cruz), a peasant girl. Goya and de Godey are obviously charmed by the Duchess’s exotic beauty and free-spirited attitude, but the Prime Minister is equally smitten with Pepita. The Prime Minister invites her to the royal court in Madrid, where she becomes his mistress and the subject of several of Goya’s paintings. However, Queen Maria Luisa (Stefania Sandrelli) disapproves of de Godey’s new love, and instead arranges for him to marry the Countess de Chinchon (Maria Alonso), a plain-Jane member of low-level royalty. The Duchess is upset with de Godey’s marriage, as it keeps her away from a collection of royal jewelry she covets. When the Duchess suddenly and mysteriously dies, Goya, de Godey, and Pepita are all murder suspects and must confess where they were and what they were doing at the moments leading up to her death. While the film itself received mixed notices, Aitana Sanchez-Gijon received the Silver Shell as Best Actress at the 1999 San Sebastian Film Festival. The version screened at San Sebastian and several other festivals in the fall of 1999 was director Bigas Luna’s original cut; the film’s producers announced that the film would be re-edited for international release. ~ Mark Deming, All Movie Guide