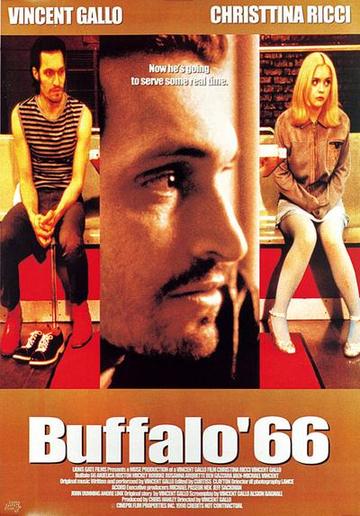 “allmovie” wrote:
by Bhob Stewart
Actor Vincent Gallo (The Funeral, Palookaville) made his feature directorial debut with this drama about convict Billy Brown (Gallo), released after half a decade spent behind bars. Drifting into downtown Buffalo, Billy kidnaps teen Layla (Christina Ricci) and has her pose as his loving wife when he visits his parents (Ben Gazzara and Anjelica Huston). Layla praises him and goes along with his fanciful tale that they met at CIA headquarters, where they both worked. Mom and dad not only fall for this, they are entranced by Layla, who soon begins to embellish her act. When she claims to be pregnant by Billy, he hustles her out to a bowling alley and on to a restaurant, where they run into trampy Wendy (Rosanna Arquette), who might be Billy’s former girlfriend. Eventually, Billy seems ready to track down and kill the person he feels was responsible for his five years in the slammer. Shown at the 1998 Sundance Film Festival. “Time Out Film Guide” wrote:
Gallo’s directorial debut is one of a kind, an eccentric, provocative comedy which laces a poignant love story with both a sombre, washed-out naturalism and surreal musical vignettes. Throwing out the standard repetitions of shot/reverse shot, Gallo brings an individual film grammar to the screen, a beguiling mix of formal tropes and apparently impetuous conceits. If not autobiographical, then at least deeply personal, the film follows one Billy Brown (Gallo) out of prison and back to his hometown, Buffalo, NY. There he kidnaps a girl, Layla (Ricci) a busty, blonde in two-inch skirt and dazzling fairy tale slippers, and entreats her to play his loving wife for his parents’ benefit. The homecoming goes a long way to explain Billy’s aggressive insecurity: his indifferent mom (Huston) is a rabid football obsessive, while his dad (Gazzara) is taciturn and hostile, though taken with Layla. The cruel caricature of this sourly funny episode is tempered by Layla’s sweetness. Billy’s turmoil is redeemed in her simplicity. You may scoff at such blatant male wish-fulfilment, but when Billy finally opens himself to the threat of intimacy, it’s a heart-rending moment. A brave, honest, stimulating film, this reaches parts other movies don’t even know exist.