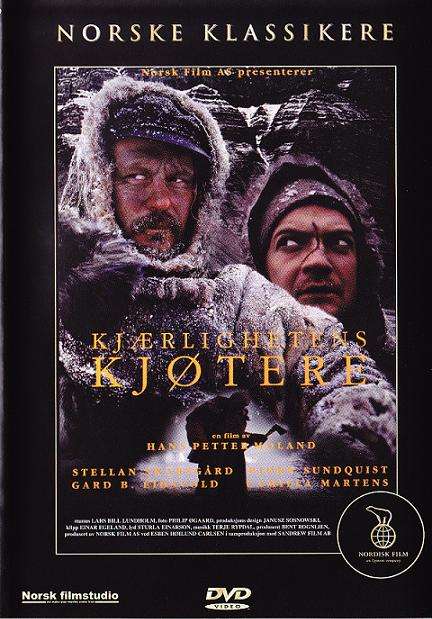 Gard Eisvold is a restless, poor young writer living in Oslo who decides to get a little more worldly by joining an Arctic fur-trapping expedition. Leaving behind his girlfriend, Eisvold travels to Greenland, where he’s confronted with the dual harshness of the elements and his profane station-captain, played with brilliant malevolence by the great Stellan Skårsgard. The captain doesn’t take kindly to having a violin-playing, poetry-writing college boy around the cabin, and he begins to torture Eisvold in a cunning if none too subtle fashion. Soon, of course, they’re at each other’s throats despite each needing the other’s help to survive the wilderness.

REVIEWS
New York Times, Stephen Holden
The big chill cast by Hans Petter Moland’s raw-boned polar adventure film, Zero Kelvin, is so penetrating that you might want to consider wearing thermal underwear to the Film Forum, where it opens today.

Zero Kelvin intersperses terrific hunting sequences with an increasingly strained Hemingwayesque allegory of the power struggle between a brutal man’s man and a sensitive literary type. Much of that struggle revolves around Randbaek’s caveman sexual philosophy.

Eventually Randbaek and Larsen find themselves locked in a life-or-death struggle for survival, and Randbaek, who has softened a bit under the poet’s influence, reverts to brutal form. Larsen discovers the violent side of himself. This grim, sorrowful recognition, the film suggests, marks Larsen’s initiation into true manhood.

Zero Kelvin pretty much belongs to Mr. Skarsgard, who recently made a splash as the lusty oil-rigger in Breaking the Waves. As Randbaek swings from homicidal rages to unexpected bouts of weepy self-pity, Mr. Skarsgard lends the character a tragic stature. But when the screenplay finally has him spew out a confession that is meant to explain his temperament, it sounds too pat. A force of nature like Randbaek shouldn’t have to be rationalized.

The stormy emotional weather is powerfully underlined by the film’s gripping vision of an Arctic existence ruled by wind, snow, cold and wild animals. Beneath a churning gray sky that looks as implacably indifferent as eternity itself, human life seems as inconsequential as a wisp of snow upon an ice field.

Ozus’ World Movie Reviews, Dennis Schwartz
This “thinking person’s adventure film” was co-written by Lars Bill Lundholm and adapted from the novel Larsen by Peter Tutein. It’s a beautifully photographed slow developing character study that builds to its powerful conclusion after setting all the human elements in place.
[…] In this allegorical struggle between the primitive and the civilized natures of man, the inhospitable godlike beautiful landscape stands uninterested in man’s world and suffering. To survive means that Larsen must adjust his thinking, and it concludes with the romantic’s slow conversion from a cultured idealist to a cynic who is not far removed from Randbaek.

digitallyOBSESSED.com, Dan Heaton
While Henrik is the protagonist of the story, the most intriguing person is the demented Randbaek – a vicious monster who treats others like nothing. On the surface, no humanity exists within this man, but this lack of caring stems from the guilt-inducing demons of his past. A virtually unrecognizable Stellan Skarsgard creates a compelling three-dimensional character who cares little for the rules of civilization. His words towards Henrik are vicious, but they also contain degrees of truth that he can’t deny. Over the past few years, Skarsgard has shown an ability to play an amazing variety of character types, including Good Will Hunting’s frustrated math teacher, Timecode’s alcoholic movie producer, Ronin’s double-crossing mercenary, and Amistad’s compassionate abolitionist. Randbˆæk is one of his best performances due to the difficulty in generating any sympathy for his actions.

On the surface, Zero Kelvin is an adventure film about men struggling to survive in the wild, but in actuality it focuses more on ideas than action. The main conflicts often arise over discussions about the nature of love and women in general. Their opposing views immediately place Henrik and Randbaek against one another early in the story. The environment serves as the catalyst in bringing their views to the forefront. Within the uncaring weather and cold land, no walls exist to hide their feelings. Within the small cabin, their differing personalities will clash with virtually no middle ground between them.

A majority of the film takes place within a single room, and this confined place limits Moland’s direction. This also slows the pace several times, and repetition and monotony starts to creep into the story. However, it’s this same spatial limitation that allows for the intimate study of each of the characters. American audiences expecting a Norwegian version of The Edge or Vertical Limit will obviously not enjoy the intricacies of this movie. Viewers looking for more intellectual fare should enjoy this adventure, which creates disturbing drama within a fairly simple structure.

The Austin Chronicle, Marc Savlov
Molland’s film builds with a sly, steady power, and while the first third is a bit slow in places, the nerve-wracking tension steadily continues its terrible ascent. Although Zero Kelvin was not actually shot in Greenland, but instead in the more accessible Norwegian area of Svalgard, Molland’s sweeping depictions of the trapper’s snowbound home (what little there is: a wood and scrap-metal shack is pretty much the sum of it), the surrounding glaciers, and craggy mounts act as a sort of fourth character.

Although the men are dependent on their surroundings for both food and shelter, it’s also their greatest enemy. The nearest town is at least 60 miles away, and the company’s supply ship won’t be back for a year’s time. As such, Molland fills his palette with grandiose long shots, dozens of them, which serve to imprint on the audience just how desperate the trappers’ situation is. It’s an awe-inspiring, terrible sense of isolation and spiritual malaise that Zero Kelvin manages to inspire, which, granted, doesn’t make this the most upbeat of summer film choices. Still, tension like this should be savored, racheting up the frissons to the freezing point. 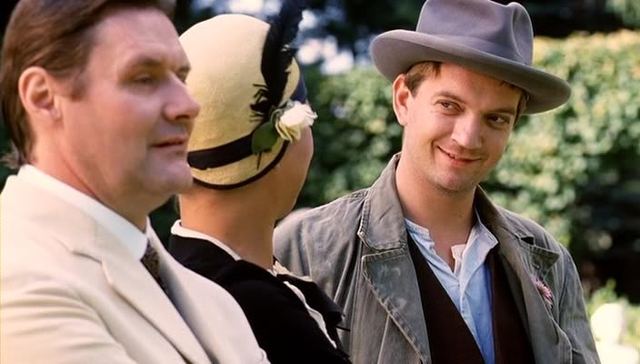 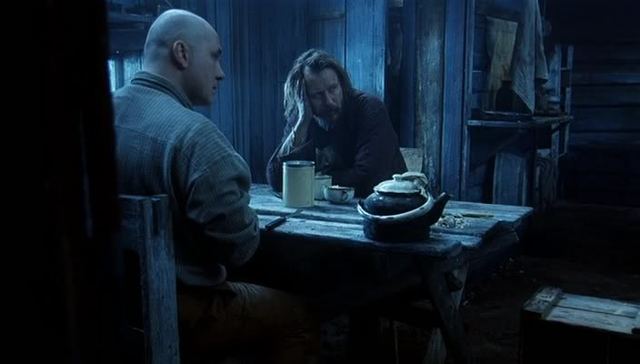 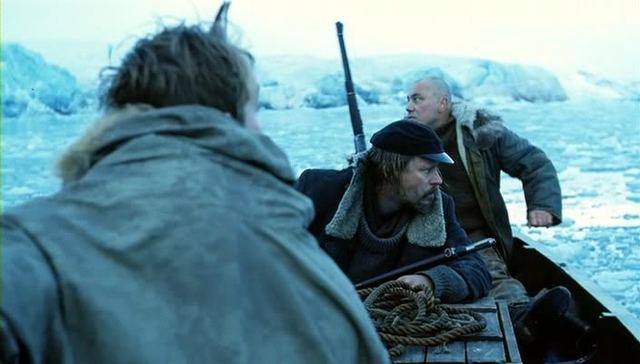 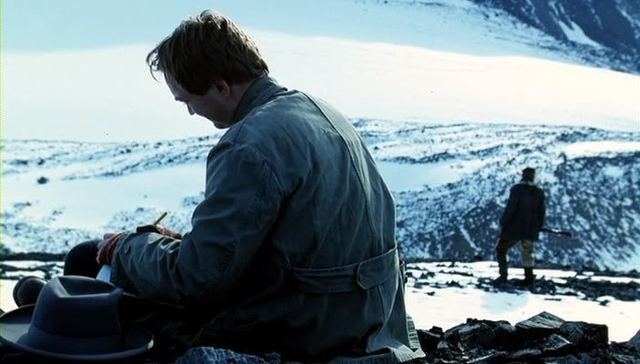 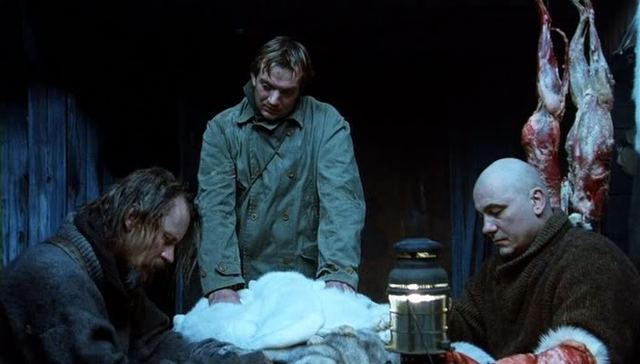 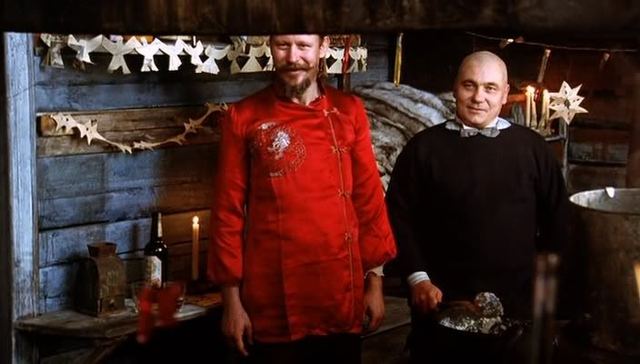