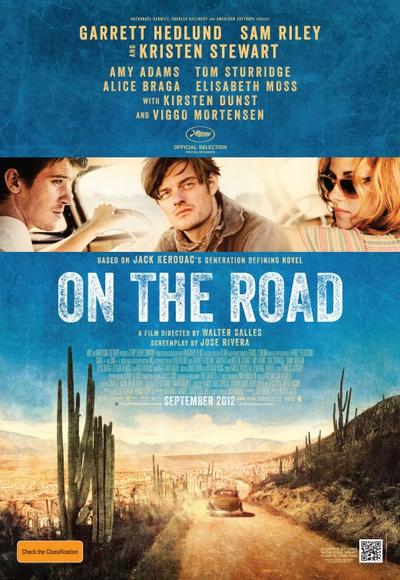 CANNES REVIEW: Why Walter Salles’ ‘On the Road’ Adaptation Is Better Than You Think

Red flags go up when a filmmaker embarks on adapting a beloved classic. Walter Salles’ long-gestating big screen treatment of “On the Road” spent years in development and the nearly-two-and-a-half hour treatment of Jack Kerouac’s seminal novel of the Beat Generation invited immediate skepticism. Kerouac’s autobiographical look at his friends and their journeys around the country in the late 1940s has become so closely identified with his prose that any attempt to replicate it would automatically create a certain distance from the material — or it seemed. As it turns out, Salles’ “On the Road” does the trick well enough. Overlong and unfocused in parts, Salles’ adaptation nonetheless holds together about as well a movie can when the odds are so heavily stacked against it.

Like Salles’ “The Motorcycle Diaries,” the movie avoids falling apart from the outset by not taking the material for granted. Salles, working from Jose Rivera’s screenplay, begins with a pensive snapshot of Kerouac alter ego Sal Paradise (Sam Riley) in the middle of his cross-country journey, hitching a ride and enjoying the open road. The atmosphere of his travels comes first, establishing the book’s searching nature ahead of its loose plot. From that early point, “On the Road” adopts a serious, low-key approach to establishing Sal’s world that keeps the characters grounded.

From its introductory scene, “On the Road” flashes back to five months earlier, when the New York-based Sal accepts an offer from his pal Dean Moriarty (Garrett Hedlund) to visit him in Denver. It’s there that he meets Dean’s enthusiastic lover Marylou (Kristen Stewart), to whom Sal finds himself increasingly drawn.

Joined on occasion by the Allen Gingsberg-inspired Carlo Marx (Tom Sturridge), the motley crew spends most of the movie raising a ruckus in small towns, getting hammered, having threesomes and talking about life. “The only people that interest me are the mad ones,” says Dean. As the comparatively shy Sal looks up to his friend to follow that logic, “On the Road” enlivens their adventures with a steadily engaging mood.

But that owes more to ingredients that make the movie durable in individual moments than anything from the original book. The filmmaker’s use of handheld camerawork, a jazzy soundtrack and all-around committed performances help “On the Road” remain steadily watchable even as it meanders through a problematic middle section.

Which is not to say its flaws are invisible: Tangents involving a visit the group pays to William S. Burroughs (Viggo Mortensen, making an extended cameo) and the marital issues that Dean faces with his estranged wife Camille (Kirsten Dunst in the Carolyn Cassidy role, fairly bland), drag the material in aimless directions. “On the Road” suffers from a deadening effect as it moves along to no particular conclusion other than Sal’s decision to finally write his book. By its end, “On the Road” has made a case for how it can work as a movie and why certain aspects of it never will. In essence, the movie is about the book rather than a fleshed-out realization of it.

The novel’s legacy aside, “On the Road” successfully showcases its main performances. Riley stands out in his Kerouac performance, which has a certain soulfulness that echoes his breakthrough turn in Anton Corbijn’s “Control.” Hedlund is sufficiently overconfident as Moriarty, but Riley’s true counterpoint in the story comes from Stewart’s achievement as the giddy, pleasure-seeking Marylou, a credible performance made particularly noteworthy for her current fame in the “Twilight” franchise; frequently going nude, speaking up and dominating most of her scenes, she buries her movie stardom with this refreshingly non-commercial gig.

In fact, the engine of “On the Road” largely stems from its lack of commerciality. It’s usually a bad sign when any movie resorts to putting a writer in front of his typewriter as his prose takes the form of voiceover narration. But “On the Road” only does that near the very end, when it must inevitably arrive at the creation of the text. Before that point, Salles manages — as he did with “The Motorcycle Diaries” — to render most of the prose in experiential terms. In the process, the film gets weighed down by the idealism of the original work, but that’s also exactly what allows it to convey the novel’s sentiments.