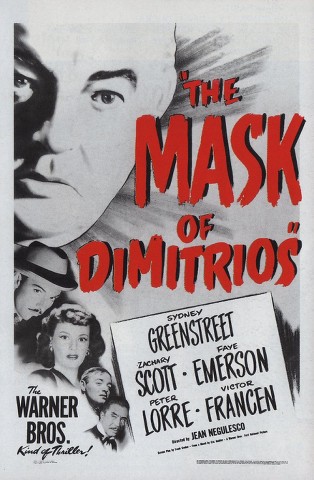 Synopsis:
Sydney Greenstreet and Peter Lorre make a marvelous team in this exhilarating and atmospheric Film-Noir that Daily Variety hailed as “one of the most brilliant crime dramas yet filmed.” When the body of Dimitrios Makropoulos (Zachary Scott) washes ashore in Istanbul, there is cause for celebration all across Europe. The devious sociopath has left as his legacy an array of crimes including blackmail, thievery, murder and high treason. Interested in chronicling the dead man’s unscrupulous exploits, mystery writer Cornelius Leyden (Lorre) takes up his trail, aided by a mysterious man named Peters (Greenstreet). But as Leyden zeroes in on the truth about Dimitrios, he finds that his new associate has an ulterior motive in helping him – with Leyden as the unwitting accomplice! As suspenseful and riveting as the Eric Ambler novel on which it is based, The Mask of Dimitrios is “an exceptional picture” (Los Angeles Times) that delivers nonstop, pulse-quickening excitement!