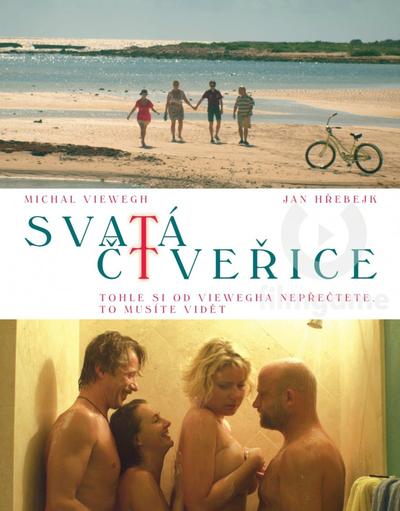 Marital fidelity can wear you down, and Ondra (Hynek Čermák) and Vitek (Jiří Langmajer) are certainly suffering from a case of serious fatigue. Working side by side and living next door to each other, it doesn’t take long before these two long-married middle-aged pals start comparing sex notes, and it’s plain to see their latest scores have fallen far below what they would have hoped. Luckily, a surprise holiday on a tropical island rekindles their interest in their wives — only they don’t exactly lust after their designated partners. With no one to divert their attention, their roaming eyes inevitably settle on the wrong spouse, and pretty soon they’ve established their own little Holy Quaternity. The new film from Jan Hřebejk, director of the Academy Award®–nominated Divided We Fall, is an observant and audacious look at the measures some couples will take to revive desire. Ondra and Vitek’s irrepressible joie de vivre makes it impossible to pass judgment, even when the two couples break their own rules by fooling around behind each other’s backs. Parents to two sets of hormonally charged teenagers who endlessly circle each other in a clumsy pre-coital ritual — Vitek has two girls, Ondra two boys — the adults soon put their kids to shame by secretly straddling the fence that divides their communal front yard. With an original script from bestselling Czech author Michal Viewegh, The Holy Quarternity is an unapologetic comic romp. Savouring every minute of their brazen antics, Hebejk gives them free rein on love. In fact, there’s so much of it going around you’re almost convinced it’s all going to work out — but divided they fall, indeed, and soon everyone has to make do with what they’ve got. Or do they? Whether this (un)holy quaternity will live to regret their transgressions is for you to find out!