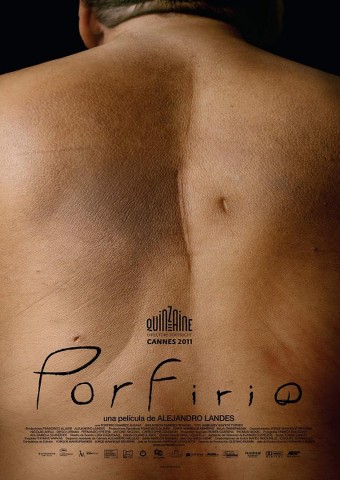 An adult male, 155 centimeters tall, of dark complexion; presents frontal baldness, regular eyebrows, brown eyes, wide nose, big mouth with thick lips, slight upper lip hair and big ears with free hanging lobes. He shows paralysis in the lower limbs, an open sore in the left gluteus and an old wound from a firearm projectile in the back; he moves in a wheelchair.

About the Film
Paralyzed from the waist down by a stray police bullet, the title character in Alejandro Landes’s award-winning film spends his days selling minutes on his cell phone, flirting with his comely neighbor—and secretly plotting his revenge. Landes worked on the film for five years, creating a tale that joins the most intimate details of Porfirio’s day-to-day life with an astonishing recreation of his attempt to hijack an airplane.

About the Filmmaker
Alejandro Landes was born in São Paulo, Brazil. He studied literature, economics and architecture at Brown University, then went on to become a journalist and television writer. His first film, the documentary Cocalero, premiered at Sundance in 2007 and opened theatrically in more than ten countries. With Porfirio, Landes was a fellow at the Cinéfondation Residence and the Sundance Institute.

“Brilliant and original… Landes frames with sensibility and tact, yet with hyperrealist imagery that makes no concessions.” —Julio Feo, RFI

“An accomplished and engaging film in every way.” —Michael Sicinski, CinemaScope

“Alejandro Landes’s Porfirio is especially pleasing because it seems a pure triumph of directorial sensiblity: an outline of the project would not hint at the film’s virtues. The widescreen aspect ratio is just right to depict the often horizontal protagonist, and Landes’s lovely, symmetrical compositions are generally scaled to the dimensions of the people who inhabit them. Continuously imaginative in both the visual and the behavioral realms.” —Dan Sallitt, Mubi.com