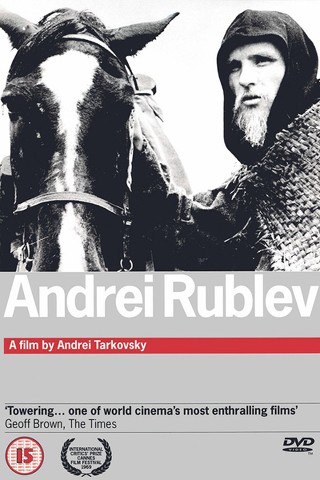 Presented as a tableaux of seven sections in black and white, with a final montage of Rublev’s painted icons in color, the film takes an unflinching gaze at medieval Russia during the first quarter of the 15th century, a period of Mongol-Tartar invasion and growing Christian influence. Commissioned to paint the interior of the Vladimir cathedral, Andrei Rublev (Anatoli Solonitsyn) leaves the Andronnikov monastery with an entourage of monks and assistants, witnessing in his travels the degradations befalling his fellow Russians, including pillage, oppression from tyrants and Mongols, torture, rape, and plague. Faced with the brutalities of the world outside the religious enclave, Rublev’s faith is shaken, prompting him to question the uses or even possibility of art in a degraded world. After Mongols sack the city of Vladimir, burning the very cathedral that he has been commissioned to paint, Rublev takes a vow of silence and withdraws completely, removing himself to the hermetic confines of the monastery.

Rising quickly out of this mire, the film’s final section (a short story in its own right) concerns a boy named Boriska (Nikolai Burlyayev) who convinces a group of travelling bell-makers that his father passed on to him the secret of bell-making. The men take Boriska along, mostly because they pity and are amused by him, but they are quickly enthralled by the boy’s ambition, determination, and confidence that he alone knows how to build the perfect bell. Boriska is soon commanding an army of assistants and peasant workers, and, indeed, his fierce temperament and refusal to accept anything but the best possible work and materials from the men fools the viewer — possibly Boriska himself is fooled — into thinking that he does in fact possess the secret, and that on the appointed day when the silver bell is lifted from the ground and its mallet set in place, it will ring. Amid this maelstrom of activity and confusion, Rublev appears; at first standoffish and mistrustful of the boy, he finds himself drawn to Boriska’s courage and unselfconscious desire to create. Moved to put aside his vow of silence, Rublev serves finally as the boy’s confessor, and he finds that, through Boriska, his faith, and art, have been renewed.