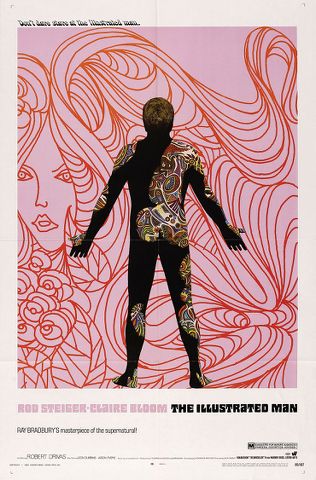 The Illustrated Man is a 1969 American science fiction film directed by Jack Smight and starring Rod Steiger. The film is based on three short stories from the 1951 collection The Illustrated Man by Ray Bradbury: “The Veldt”, “The Long Rain”, and “The Last Night of the World”.

The Illustrated Man comprises three science fiction short stories from Ray Bradbury’s collection of the same name. Howard B. Kreitsek wrote the screenplay that encompassed the stories “The Veldt”, “The Long Rain”, and “The Last Night of the World”, Jack Smight directed the film. Bradbury was not consulted for the adaptation.[1] The author sold story rights to the film in December 1967 for $85,000, but he did not sell the film rights. Since the collection included eighteen short stories, Smight chose three stories and used the carnival sideshow freak who appeared in the collection’s prologue and epilogue as the film’s primary narrative. As the freak, the director cast Rod Steiger, whom he had known since the 1950s.

“The Veldt” — Far into the future, two parents use an artificial “nursery” to keep their children happy. The children use the high-tech simulation nursery to create the predatorial environment of the African veldt. When the parents threaten to take it away, the children lock their parents inside where they are mauled and killed by the “harmless” machine-generated lions of the nursery.

“The Long Rain” — A group of astronauts are stranded on Venus, where it rains continually and heavily. The travelers make their way across the Venusian landscape to find a “sun dome”, a shelter with a large artificial light source. However, the first sun dome they find has been destroyed by the Venusians. Searching for another sun dome, the characters, one by one, are driven to madness and suicide by the unrelenting rhythm of the rain. At the end of the story, only one sane astronaut remains and manages to find a functional sun dome.

“The Last Night of the World” — In this story, the entire planet awakens to the knowledge that the world is going to end that very evening. Nonetheless, they go through their normal routines of going to work, eating, brushing their teeth, and falling asleep, knowing and accepting the fact that they will not wake up. This is in strong contrast to the looting and riots typically expected in this situation.