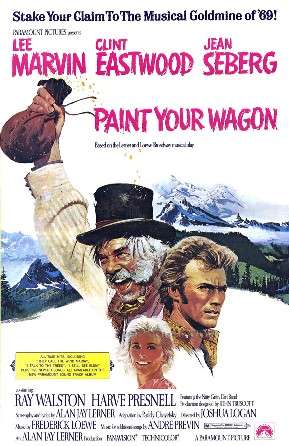 Marvin and Eastwood star as California prospectors during the Gold Rush of 1849-50. Eastwood is the calm, restrained one; Marvin is noisy and rambunctious. Marvin buys a wife, Seberg, from a local Mormon. Then, to make sure the lonely local miners will leave his new bride alone, he hijacks a wagonload of prostitutes and takes them to the prospectors in the mining town he has founded, No Name City, setting them up for business at a saloon. While Marvin is away, Eastwood and Seberg fall for each other; but when Marvin returns and discovers the affair, Seberg declares that she’d like them both as husbands.

* The budget originally assigned to the film was a huge fourteen million dollars; it went wildly over this and ended up costing twenty million. Eastwood was enraged at the waste he witnessed during the filming.
* This was not Clint’s first singing role: as Rowdy Yates, he sang in at least one episode of Rawhide (“The Pitchwagon”).
* There were rumours in the press of an affair between Clint and co-star Jean Seberg.
* Clint rented a farm for the duration of the film where he would look after the animals and barbecue with Lee Marvin.