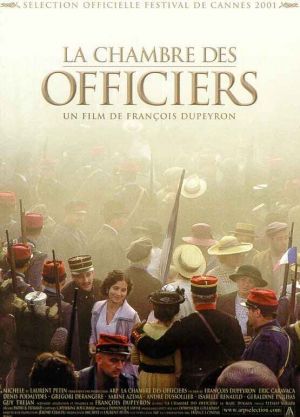 Quote:
A man who thinks he’s found an easy ride through the Army during World War I has his world turned upside down when facial injuries render him unrecognizable in this wartime drama. In the summer of 1914, Adrien Fournier (Eric Caravaca) is an engineer conscripted into the French Army, where he is made a lieutenant and assigned to join a group of soldiers helping to design and build a bridge to move troops near the front lines. While scouting a suitable location for the bridge, Fournier and his fellows are caught in the middle of an attack, and a shell explodes in his face. Fournier survives the attack, but while his limbs and his body suffer only minimal damage, his face is torn to shreds — only landing in the mud prevents him from bleeding to death (the dried muck seals off a number of key blood vessels severed by the blast). It is some time before Fournier can be moved to an Army hospital, and he cannot talk through his ruined mouth, communicating with notes scratched onto a small chalkboard. Fournier finds himself in a special hospital wing for officers who’ve suffered severe injuries (a relatively comfortable area a good bit different from the crowded and spartan wards for common foot soldiers), and as a dedicated surgeon (Andre Dussollier) struggles to rebuild Fournier’s face with the primitive means available to him, the once-handsome engineer ponders an uncertain future. Commiserating with Fournier are Alain (Jean-Michel Portal), his best friend from college; Pierre (Gregori Derangere) and Henri (Denis Podalydes), a pair of fellow officers also suffering facial injuries; and Anais (Sabine Azema), a patient and warm-hearted nurse who brings hope to the hospital’s most severely injured men. La Chambre Des Officiers was screened in competition at the 2001 Cannes Film Festival.