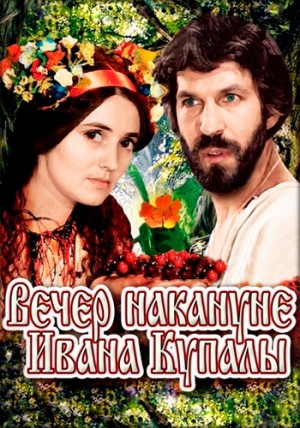 Banned by the Soviet authorities, Vecher nakanune Ivana Kupala (The Eve of Ivan Kupalo) is widely held to be one of the masterpieces of Ukrainian Poetic Cinema. Adapted from a short story of Gogol, which had its roots in Ukrainian folklore, the film depicts an almost Faustian pact, in which Piotr makes an unholy deal with Bassaruv in order that he may win the hand of Pidorka from her father. The director Yuri Ilyenko brings the same rich, vivid imagery that he lent to Parajanov’s Shadows of Forgotten Ancestors where he worked as the cinematographer. The film often makes difficult first viewing for unaccustomed viewers due to its hallucinatory nature, but its lucid tapestry renders it a mandatory experience.

Director Yuri Ilyenko started his career as a cinematographer on films like Sergie Parajanov’s classic TINI ZABUTYKH PREDKIV (SHADOWS OF FORGOTTEN ANCESTORS; 1964), a job he continues to perform on his own directorial efforts, which include LEBEDYNE OZERO-ZONA (SWAN LAKE THE ZONE; 1990) and MOLITVA ZA GETMANA MAZEPU (A PRAYER FOR HETMAN MAZEPA; 2002). VECHER NAKANUNE IVANA KUPALA (THE EVE OF IVAN KUPALO), Ilyenko’s second outing as a director, was based on the story “The Eve of St. John” by Nikolai Gogol (who in turn based it on a Ukrainian fairy tale), whose work has provided the source material for genre classics like BLACK SUNDAY and VIY, in whose company IVANA KUPALA rightly belongs.

Unsurprisingly, the vibrant, sexy and surreal IVANA KUPALA was banned by Communist authorities, just as Ilyenko’s directorial debut RODNIK DLJA ZHAZHDUSHCHIKH (A SPRING FOR THE THRISTY; 1965) and the aforementioned TINI ZABUTYKH PREDKIV were. The ban has since been overturned, yet the film remains undeservedly obscure. Outside a brief theatrical run in 1989 as part of a program dedicated to screening films considered too “risky” for commercial release, it has never been distributed in the US. I for one think it’s past time we were granted access to this hallucinatory gem ASAP!

Piotr is a modest farmhand living in an impoverished village in some unspecified long ago era. He wants to marry the lovely Pidorka, but her stern father won’t hear of it. Luckily for Piotr, the mischievous demon Bassaruv is loose in the land, and offers him a deal: pluck a flower that blooms only on the eve of Ivan Kupalo and he’ll grace the penniless Piotr with several bags of gold. The only thing is, Bassaruv is in fact the Devil himself and, together with an equally diabolic witch, tricks Piotr into killing the youthful brother of his desired bride.

As promised, Piotr is given a mound of gold, which convinces Pidorka’s father to allow the marriage to go forth. But Piotr finds himself afflicted with amnesia…and quite a few bizarre hallucinations (a bleeding loaf of bread, people walking on his ceiling, etc.). His memory finally returns on the following eve of Ivan Kupalo, but his house burns to the ground, incinerating Piotr inside.

The widowed Pidorka finds herself understandably grief-stricken. She becomes a nun and takes to wandering the land with Piotr’s ashes. One day, however, she’s harassed by a horse-riding army led by the demonic Bassaruv, and spills most of the ashes. In desperation, Pidorka takes what little remains of her beloved to a candlelight festival honoring an icon of the Virgin Mary–it cries magical tears apparently capable of raising the dead…

The experience of viewing this film may be a rough one for Western viewers: it lacks the slick professionalism we’ve come to expect from our cinema and is steeped in Ukrainian folklore, which feels so foreign to our own culture it may as well emanate from another planet. The tripped-out handheld camerawork, whiplash changes in tone (from horror to slapstick comedy to action to religious drama) and bewildering variety of cinematic techniques utilized herein (negative exposure, superimpositions, fast motion) can also seem off-putting. The hallucinatory sequences, while appropriately mind-boggling, are likewise puzzling, simply because the film’s sense of “reality” is hopelessly skewed to begin with (in particular a wedding procession set on a tiny island bearing a miniature castle and the interior of the protagonist’s house, with paintings of tree branches covering the walls).

The film is a must-see nonetheless, although it may take a few viewings to fully comprehend Yuri Ilyenko’s defiantly off-kilter approach. Audacity and exuberance are his major assets, and combine here to create a stunningly hallucinatory symphony of sight and sound.
— Fright.com