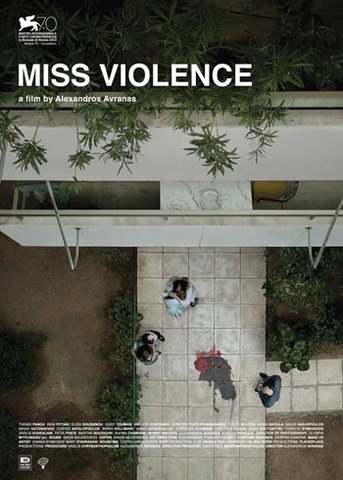 Synopsis
On her birthday, 11-year-old Angeliki jumps off the balcony to her death with a smile on her face. An investigation is started as to the reason for this apparent suicide, but the family keeps insisting that it was an accident.
IMDb.com

Reviews
…Filmed largely in washed-out pastels, with neutral or retro clothes and bland petit-bourgeois interiors (as well as the absence of mobile phones) pushing the action into a past-present netherworld, Miss Violence is at its best when it hints rather than shows, though a shockingly graphic scene of sexual abuse near the end is justified, perhaps, by the fact that we’re only watching what we had already figured out. The fact that its victims are themselves, at times, abusers, adds another depressing twist to the film’s implacable portrayal of tyranny in action.
Lee Marshall, Screen Daily

The cinematography and sound design is maddening, the camera focuses on a dimly lit hallway or a pastel wall while something is happening off-screen. The camera is sometimes static, focusing on a particular room of the house as family members pass through it. Other-times it revolves around the most uncomfortable dinner table scenes in recent film memory. It all feels completely off-centre…
Kwenton Bellette, Twitch

Cinema’s Greek new wave has brought us exciting movies such as Yorgos Lanthimos’s Dogtooth and Athina Rachel Tsangari’s Attenberg – films with a bracingly angular, deadpan challenge. Now we have Alexandros Avranas’s troubling drama Miss Violence, a macabre movie about evil that also contrives to be about Greece’s own national anguish. It is a film with real technique, but it revives my worry that Greek film-makers are cultivating a self-conscious mannerism of the bizarre…
Peter Bradshaw, The Guardian

When Leonard Cohen’s Holocaust-referencing torch ballad “Dance Me to the End of Love” is used to soundtrack introductory scenes of a child’s birthday party, it’s a safe sign that things aren’t going anywhere pleasant — and “Miss Violence,” an airless but accomplished sophomore feature from Alexandros Avranas, duly lives up to that promise. Before the opening credits are up, the 13-year-old birthday girl has plunged to her death from a fourth-story balcony, while her family’s strangely stilted response to the suicide suggests she had her reasons. New Greek cinema has been so flooded of late with fun-for-the-whole-family nightmare narratives that this one has limited capacity to shock, but a committed tone and immaculate craft should ensure ample fest exposure for the pic’s predictable perversions…
Guy Lodge, Variety