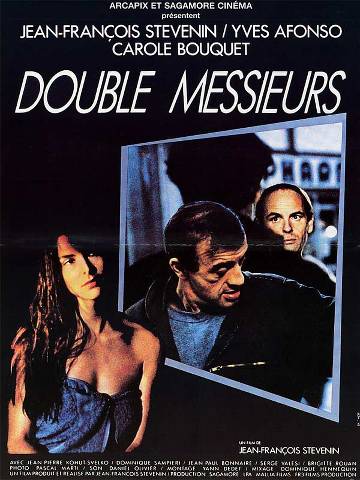 Quote:
In a routine look at what it means to finally leave adolescence behind — even in one’s mature years — this series of mood swings and sequences focuses on two grown men. Francois (Jean Francois Stevenin, the director) and Leo (Yves Alonso) are old friends, and at one point they decide to go out and search for one of their childhood buddies, the brunt of several of their practical jokes. In true form, the men opt for playing yet another practical joke on their friend, but their plans backfire when his wife Helene (Carole Bouquet) comes into the picture instead. Her presence forces them to reconsider their shenanigans in a new light.

Double messieurs is the second film from actor-turned director Jean-François Stévenin, an unsettling comedy drama which breaks new ground in cinematic storytelling. As with Stévenin’s first film, Passe-montagne, the interaction of the characters assumes far greater importance than the plot, which is just as well as the plot is virtually non-existent.

The film is an exploration of the relationship of three characters – two old friends and an unknown woman whom Fate throws together – as they play out a contrived, Woody Allen-style farce, reacting to threats which are entirely imaginary, effectively behaving like confused children. The comedy is downplayed to the extent that it is often impossible to judge whether a situation or a line of dialogue is intended to be funny or not – one of many reasons why watching this film is a far from comfortable experience.

Stévenin’s innovative approach is as off-putting as it is breathtakingly original. The unconventional photography and even stranger editing suggests a Godard-esque influence, whilst the discordant mix of comedy and drama is redolent of the work of Bertrand Blier. Add to this a heavy-handed appropriation of the policier style for the first part of the film and you’d be forgiven for thinking this is just another example of an auteur experimenting with cinematic form for its own sake. Although it’s not a film that is easy to like and certainly not one that will appeal to the majority of film enthusiasts, Double messieurs does have a touch of genius about it – particularly its sombre, intensely melancholic closing instalment set in a stunning mountain location. (James Travers)