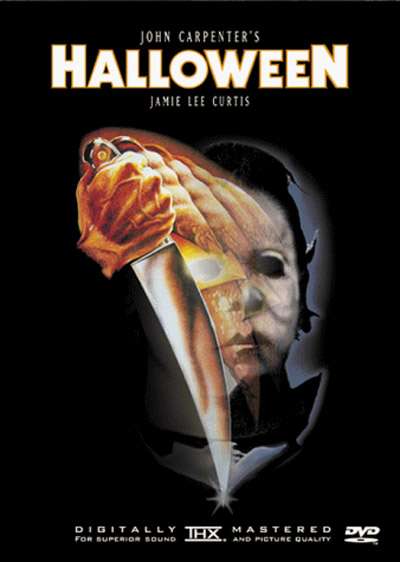 It was “The Night HE Came Home,” warned the posters for John Carpenter’s career-making horror smash. In Haddonfield, Ilinois, on Halloween night 1963, 6-year-old Michael Myers inexplicably slaughters his teenage sister. His psychiatrist Dr. Loomis (Donald Pleasence) can’t penetrate Michael’s psyche after years of institutionalization, but he knows that, when Myers escapes before Halloween in 1978, there is going to be hell to pay in Haddonfield. While Loomis heads to Haddonfield to alert police, Myers spots bookish teenager Laurie Strode (Jamie Lee Curtis) and follows her, constantly appearing and vanishing as Laurie and her looser friends Lynda (P.J. Soles) and Annie (Nancy Loomis) make their Halloween plans. By nightfall, the responsible Laurie is doing her own and Annie’s babysitting jobs, while Annie and Lynda frolic in the parent-free house across the street. But Annie and Lynda are not answering the phone, and suspicious Laurie heads across the street to the darkened house to see what is going on .
Lucia Bozzola

With its almost blood-free frights, gutsy heroine, and peerless score, Halloween became the gold standard for the late 1970s-1980s teen slasher cycle (as Scream cheekily acknowledged in 1996). Taking full advantage of the widescreen frame (and offscreen space), John Carpenter builds tension through the constant suggestion that something terrible lurks just out of Laurie’s and the audience’s view, whether it’s behind a bush or in a passing car. Carpenter also shifts to the killer’s point of view, leaving the audience with only the sight of the unaware victim and the sound of Michael’s breathing. Evoking Alfred Hitchcock’s Psycho and Vertigo, as well as Howard Hawks’s original The Thing, Carpenter and co-writer/producer Debra Hill render Myers an inhuman force that paradoxically points up the psycho-sexual anxieties under the surface of small-town life, especially in the wake of the late ’60s-early ’70s sexual revolution. Teens responded to Halloween’s thrills, as the $325,000 indie film went on to gross $47 million, begetting six sequels and numerous imitators like the Friday the 13th series.
Lucia Bozzola